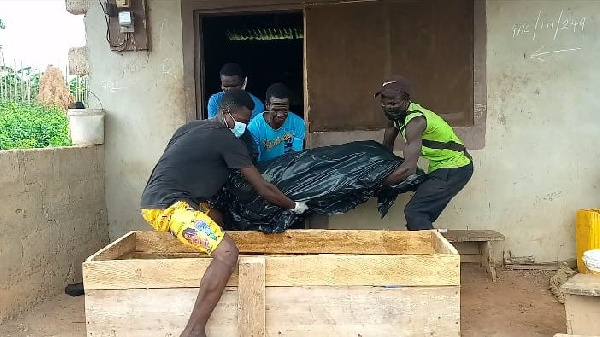 A 56-year-old farmer has been found dead in his room at Nkwanta Eduaful in the Mfantseman Municipality in the Central Region.

It is not immediately known what killed Kojo Afful who residents say is a heavy drunkard and was last seen on Wednesday, 4th August sitting at the entrance of his single-room.

They believe he must have drunk alcohol heavily without eating leading to his untimely death.

Also Check:   Video of the mysterious blackbird found in Oteele’s room as predicted by Pastor Prince

Residents say they heard a bad odour coming from his room which made them curious. His door was forced open to see his lifeless body decomposing.

The body has since been conveyed to the morgue for preservation. The Mankessim Police have since commenced investigation into the incident.

Everything is impossible until you take the steps to make it possible, be positive in every step you make. Nature will definitely give you the smoothest part of life. Email us on [email protected] Whatsapp: +233540577992
@HiplifeHiphop
Previous LGBTQ+ advocates chase French ambassador for hosting Sam George
Next Are you trying to kill Edem’s craft? – Fredyma questions Sark