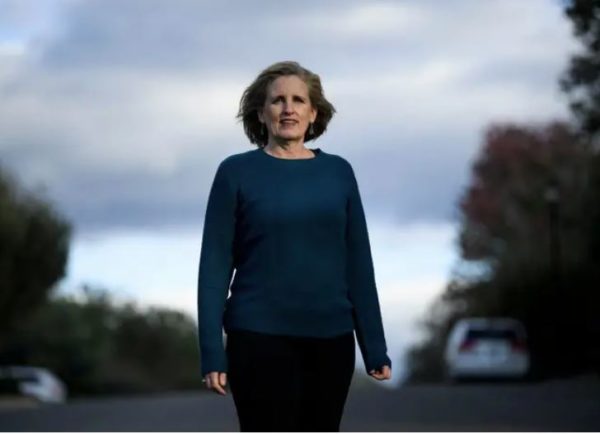 A Virginia woman who was fired after flipping off President Trump’s motorcade in 2017 turned her political frustrations into action, winning a local election on Tuesday.

Juli Briskman won a seat on the Loudoun County Board of Supervisors, beating the incumbent Republican in her district. With 99% of precincts reporting results, she captured 52.4% of the vote.

Briskman is a longtime resident of the county, which borders Washington, DC, and in October 2017, was cycling past the president’s motorcade as it was departing the Trump National Golf Course. A news photographer caught her flipping off the line of SUVs escorting Trump, and the photo went viral.

At the time, she was upset by Trump’s plan to end the immigration policy Deferred Action for Childhood Arrivals (DACA) as well as his response to the disaster in Puerto Rico in the wake of Hurricane Maria.

“I don’t employ that gesture very often but I wanted to express my opinion, and I was faced with tinted, bullet-proof glass, and I was assuming the person in the car was who I thought it was,” Briskman told BuzzFeed News in 2018.

After Briskman was identified as the cyclist, her bosses at federal contractor Akima told her she had to resign from her position as a marketing analyst. A lawsuit filed by Briskman against the company in 2018 alleged the company was afraid the Trump administration would retaliate against the company and end its contracts because of the photo.

She argued the firing violated her freedom of speech, and ultimately, she won severance from her former employer, the Washington Post reported.

Today, I am filing my organizational papers in a bid for local office in Loudoun County, Va. Loudoun deserves transparency in government, fully funded schools & smarter solutions to growth. It’s time for a change. https://t.co/OutRrIf40K

Briskman campaigned on issues including funding local schools and expanding green space in the community. Her opponent, a Trump supporter, didn’t reflect the values of the local community, Briskman said in campaign tweets.

And the campaign allowed her to take a stand against the Trump policies that once inspired her one-finger salute.