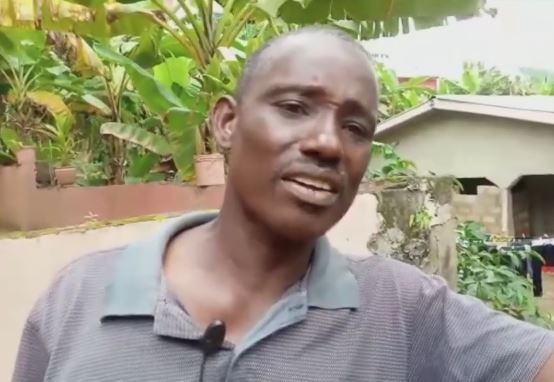 A father of one of the three missing girls in Takoradi in the Western Region, Mr. Francis Bentum is urging Government to allow them to ask the suspected kidnapper, Samuel Udoetuk Wills whether their children are still alive or not.

According to him, if they are not alive they will know what to do.

Mr Francis Bentum is the father of Priscilla Blessing Bentum who was first kidnapped on August 17th 2018.

His comment follows an operation carried out by a team of police personnel from the Criminal Investigations Department (CID) headquarters in Accra and Western Regional Police Command in an uncompleted building at Kansawrodo near the Methodist Senior High School girls hotel on Friday, August 2, 2019, where the first accused Samuel Wills was living.

During the operation, the police retrieved some remains suspected to be human parts from a septic tank close to the house.

Speaking to the media on Saturday, August 3, 2019, Mr Francis Bentum accused the police of not collaborating with them to know what was happening.

He, therefore, said he doesn’t believe that the skeletons found in the uncompleted building at Kansawrodo were their children.

Mr Bentum, seized the opportunity to urge all Ghanaians not to believe the story circulating that the skeletons were their children.

He quizzed that how could their children who were reported by the CID that they were in Nigeria be found at Kansawrodo.

“… They are not our children. It is a planned thing the guy (Samuel Wills) does to deceive people because we were told that our children were in Nigeria so how can their bodies be found here”, he opined.

The worried father is, therefore, urging Government to allow them (parents) to ask the suspect three questions and if he could answer, they leave everything to God.

He affirmed that “I don’t believe the skeletons found are our children”.

He concluded that “My wife is suffering because of this issue”.

Previous Missing Takoradi girls: 7 facts gathered about the discovery of the bodies
Next August 4 is an ’empty celebration’ – CPP