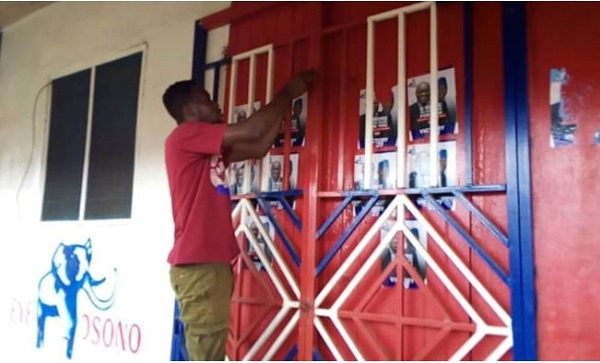 There is chaos in Abuakwa South Constituency of the NPP as some angry supporters of the ruling party are protesting the removal of the Municipal Chief Executive for the Area, Kojo Ofori Safo.

On Wednesday morning, the aggrieved NPP supporters locked up the party office at Akyem Apedwa and burnt flags and other paraphernalia of the party in expressing their displeasure.

The supporters, clad in red armbands and holding placards with inscriptions expressing their displeasure and chanting war songs, said the people of Kyebi have hijacked all positions in Abuakwa South, leaving other communities.

But aggrieved supporters of the party, mainly from the Akyem Apedwa community, say the MCE was removed to satisfy the parochial interest of some individuals.

“We don’t want any appointment except the MCE position. We are demonstrating to tell the President that we are not happy with the nomination that he has made in Abuakwa South. Winning an election is a major contributing factor to who becomes the next President and MCE; thereby, if we have done 100 per cent of both, why must we be denied the second when the President got the first”.

The disgruntled supporters said they would no longer campaign for the party in the 2024 election.

“We are demonstrating to tell the President that we have ceased to work for the party. He should go and bring his family members and Okyenhene Nana Amoatia Ofori Panin to come and do the work for him since he listens and believes in them more than us. We have followed the NPP since 1992 in the constituency but have never enjoyed a single appointment since NPP was formed. We vote massively for NPP and win all polling stations.”

Awo Ntiamoa, the former women organizer for NPP at Apedwa, said, “We are saddened. Apedwa votes for NPP more than Kyebi. The MCE who has been removed is from Apedwa; he spent only two years as MCE. This is not right because [when] Akufo-Addo became MP, I was very instrumental, but because I am not from Kyebi, [look at] my current situation. The Kyebi Palace put pressure on President Akufo-Addo to change the MCE a few days before the announcement of the MMDCEs. So are we making MCE position reserve for royals in Kyebi”

There are seething agitations around the nomination of MDCEs in many Districts and Municipalities in the Eastern Region.

However, the Eastern Regional Youth Wing of the ruling New Patriotic Party has implored all unsuccessful candidates vying for the Metropolitan and District Chief Executive positions to support those nominated by the President to help facilitate unity in development.

This was contained in a statement issued by the Regional Youth Organizer Jerry Osei -Opoku on Tuesday.

“To all who aspired for same but were unsuccessful, we send our admiration for your zeal and willingness to serve our Nation. We humbly implore you to offer optimum cooperation, unity, and support to the nominees to ensure a smooth approval by the respective assemblies…

“The New Patriotic Party remains committed to seeing significant improvement at all levels of our Nation, and we are confident that you will perform creditably in your roles, and your tenure shall be pivotal in dispensing developmental projects and policies to the remotest locality of your area”.

Everything is impossible until you take the steps to make it possible, be positive in every step you make. Nature will definitely give you the smoothest part of life. Email us on [email protected] Whatsapp: +233540577992
@HiplifeHiphop
Previous Kwadwo Mpiani reveals what NPP must do to ‘break the 8’
Next MMDCEs Appointment: Relative calm in Sunyani East and Sunyani West constituencies