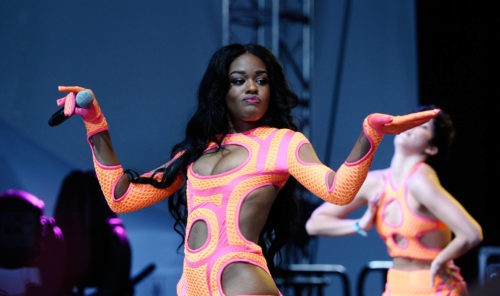 And like that, she was gone.
Azealia Banks, don’t ever change. The talented artist has given us much to unpack throughout the years, be it unique and innovative tunes, unapologetic tirades, and even the occasional recipe. Unfortunately, much of her creativity was overshadowed by her more controversial antics and before long the narrative had transformed into a villain’s origin story. Whether that’s fair or not is entirely up for debate; many still hold fast by Azealia’s side, though others jumped ship after one sudden beef too many. Now, after a little under a decade of putting in work, Azealia Banks has decided to hang up her microphone with one final PSA via Instagram Story, as preserved by HipHopNMore.

Ilya S. Savenok/Getty Images
The main crux of her message stems from a variance in taste, as many of her fans have taken to admiring “lesser” artists — at least as she sees it. “I find myself acknowledging/looking at shit I’m leagues above and it really is such a setback,” she writes. “I truly honestly could not give a fuck about any of the people you ask me to collab with.” She proceeds to take a shot at some of her favorite sparring partners, lamenting being consistently “thrown in the bucket with Iggys/Tinashes/random drag queens.” “I’m like a giant baking pies and eating cakes trying to fault mice for collecting crumbs,” she taunts. “Gotta leave the crumbs on the floor and let the ecosystem do what it does.”

She doubles down in signature fashion. “It’s true — even though I’m DEFINITELY better than all these little trash bitches ya’ll stans try collaging in with me,” she begins, claiming that the never-ending request line has proven too big a burden to bear. And thus, her exeunt from music, and possibly even social media at large. For all those “mice” eagerly lapping at the crumbs she left behind, the harvest has come to an end. And like that, she was gone. Will you miss her?