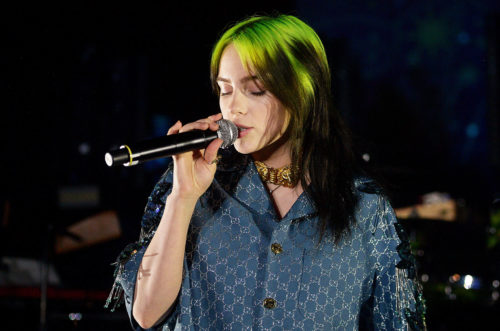 Billie Eilish has some new music in the vault.

Billie Eilish’s debut album arrived in March of this year and it’s still sitting on the Billboard charts at #8 previously at #1. Billie previously opened up about the tape’s hit single “Bad Guy” and how she really thought it wouldn’t be a hit. “I don’t know what people want anymore,” Billie said. “Because I thought that everyone would hate ‘Bad Guy’ and that everyone would hate ‘When the Party’s Over.’ I don’t know what to expect now.”

On a more recent Instagram Story share, the 17-year-old updated her fans with news on a video for “Xanny” as well as new music. “Yes, the ‘Xanny’ video is coming. Yes, I have two unreleased songs that are coming that you haven’t heard any of … Be patient, damn!” she said. On the topic of a full tape offering, Billie admitted that the idea isn’t the most exciting for her right now.

“[My next album] haunts me,” she explained. “There was a period where I was like, ‘Do I even enjoy music?'”

Billie is set to take off on a world tour next year that will kick off in Miami on March 2020 with stops in Mexico, France, Belgium, Italy, Germany, the Netherlands and more before wrapping up in UK in July 2020.

@Rexkrampa
Previous Hotline Bling: Drake Recorded Video To Woman’s Phone So She’s Selling It For $50K
Next Damage To Gucci Mane’s $600K Ferrari Not Club’s Fault, According to Venue: Report