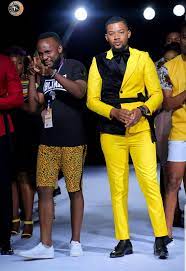 The Caribbean musician contacted Blinq Afrique from the US Virgin Islands to work on his new project titled ‘Gossip’ after watching some of the works of the latter.

‘Gossip’ is Fella Million’s latest motivational song. The animation video depicts Fella moving from street to street to encourage people to work harder and pay no heed to negative comments others make about their personalities.

Also Check:   VGMA Artiste of the Year award is not a cement bag to carry – Kuami Eugene

Known in private life as Felnando A. Lewis, the Busta Rhymes protégé until this release had performed at events which featured Sean Kingston, Lady Saw, Bunny Wailer and other popular Caribbean superstars.

Blinq Afrique on the other hand had worked with big companies like MilesCity and Samospharma Ltd.

Everything is impossible until you take the steps to make it possible, be positive in every step you make. Nature will definitely give you the smoothest part of life. Email us on [email protected] Whatsapp: +233540577992
@HiplifeHiphop
Previous May your soul rest well with the Lord – Nana Ama mourns Nana Ampadu
Next Captain Planet (4×4) – Abodie Feat. Kuami Eugene