Confusion in NDC over Muntaka rival 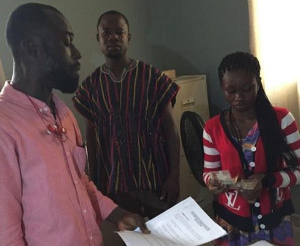 There is confusion in the opposition National Democratic Congress (NDC) over plans by Mubarak Masawudu to contest Mohammed Muntaka Mubarak for the Asawase Constituency in Kumasi in the Ashanti Region on the ticket of the party.

The campaign team of Masawudu is claiming that the some regional executives are scheming to frustrate their candidate so that he would drop out of the contest to allow the incumbent Member of Parliament (MP) to go into the 2020 unopposed.

The team said nomination forms they legitimately bought from the party’s office is being rejected by the party’s executives and the party official who sold the forms is being punished for doing her administrative job.

“The administrative secretary sold the forms to us at the regional office. We paid GH¢2000 cash to her. Kwame Zu is still denying that we’ve not picked forms because of their machinations to make Muntaka go unopposed in the primaries. But we the Asawase people would fight the plans to make the MP unopposed. We picked the forms in a legal way and we’ll push it for our candidate to contest,” Shafi Ibrahim, who said he is the Director in charge of Operations for the aspirant, told Kasapa FM in Accra yesterday.

In his reaction, Kwame Zu, Ashanti Regional Secretary of the NDC insisted that the secretariat does not have any records of anybody picking forms apart from Muntaka after the deadline.

“The administrative secretary has been relieved of her post immediately. She acted beyond bounds to issue forms to you (Masawudu camp) which is not part of her job description; it’s exclusively my job as the regional secretary to issue out forms and nobody else. As I speak to you, there are no secretarial records of anybody picking forms. If you come to the regional office to pick forms, it should be for a stated reason concerning why they were denied the forms at the constituency level,” he said.

However, the Masawudu camp has hit back saying they have concrete evidence to the effect that their candidate picked and paid for the form on Thursday and no amount of scheming by the executives would change matters.

According to a member of Masawudu’s campaign team called Usman, the NDC regional youth organizer and the party’s treasurer, nicknamed as ‘Power’, were present when they paid for and collected the forms.

Another member of the team, Adam Mohammed, aka ‘Ada’ or Field Marshall, who said they are made up of mostly NDC constituency executives at Asawase, said they were filling the forms and that they would submit it on time and contest in the NDC election at Asawase at all costs.

He stated that despite the frustration by the party executives, Masawudu Mubarak would emerge as winner in the upcoming polls and retain the Asawase seat for the NDC in 2020.