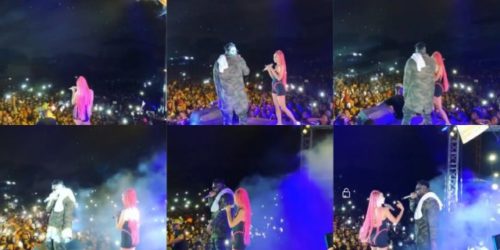 Ex-girlfriend of Medikal, Sister Derby joined her ex-lover on stage at ‘Welcome To Sowutuom’ Concert.

The crowd present at the scene was so charged witnessing the two quash their beef and solve their indifference on stage.

They performed a song together and it was just so lovely.

Their chemistry and movement also on stage brought back memories of the time they used to be chopping each other.

Fella Makafui was also excited seeing the two former lovers make peace indicating that she has been given the full green light to take charge of Medikal’s body.

Also Check:   First black woman to be inducted into the British Hairdressers Hall of fame is a Ghanaian

The AMG Business frontier’s show was graced by a whole lot of music lovers.

The venue was full to its brim sending a signal that he is a certified Prince of Sowutuom.

Many people are super excited about the peace made between Sister Derby and Medikal. They are hoping that set a pace for them to release more bangers.