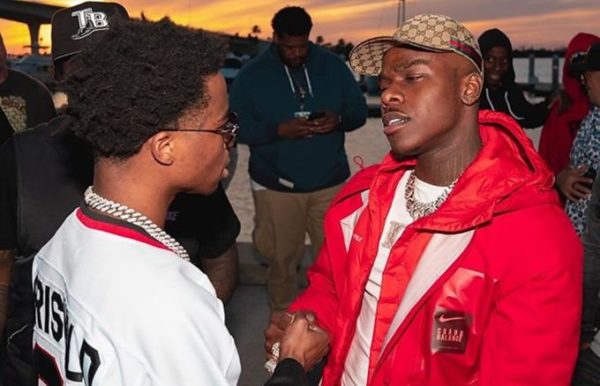 Roddy Ricch and DaBaby have been proven to be this generation’s most trusted hitmakers, at least in the past few months. Well, for DaBaby, it’s been the past year yet he’s never earned a chart-topper. Today, Billboard reports that his new collaboration with Roddy Ricch, the fan-favorite “ROCKSTAR,” is now the new number one song in the country. The song is off of Baby’s latest project, Blame It On Baby and has gained a significant amount of traction in the past few weeks.
For Baby, it’s his first number-one single but Roddy Ricch clocks in his second number-one single this year. “The Box” is having an insane run on the charts, as it held the top spot for several weeks, similar to Lil Nas X’s “Old Town Road.” Roddy still claims two spots in the Billboard Hot 100 top 10 as “The Box” holds it down at number 9.
Also Check:   Lerato Sengadi is barred off HHP’s will

Another major move on the charts in SAINt JHN’s “Roses” which has been picking up steam over the past few months, thanks to TikTok. Now, the song is rose to number 10 on the Hot 100 following the release of the remix featuring Future. Perhaps SAINt JHN is also on his way to clocking the first number-one single of his career.Check out the chart breakdown below.

Everything is impossible until you take the steps to make it possible, be positive in every step you make. Nature will definitely give you the smoothest part of life. Email us on [email protected] Whatsapp: +233540577992
@HiplifeHiphop
Previous Nasty C – They Don’t Feat. T.I
Next Twitch  Fakye (JoeBoy Cover)