New collab off “Father of Asahd” on the way.

It looks like DJ Khaled has a new Cardi B feature on the way. On Tuesday, the hit producer took to his Instagram to share a clip of him & the Bronx rapper on set of a music video, shooting down haters who “They said I couldn’t get Cardi B on my album.”

“Who the f— said that?” Cardi can be heard saying, before Khaled turns the camera to her. “They said ‘cause you won a Grammy, I can’t get you on my album,” Khaled explains, to which the rapper replied, “Who said that? This is right after the Grammys.”

Unfortunately there’s no word yet as for what the song will be called or when we can expect to hear it, but it’ll presumably see life on DJ Khaled’s long awaitedFather of Asahd album, whichis coming sometime this year.

In addition to Cardi, Khaled has also teased upcoming “anthems” with Drake, Bryson Tiller, Meek Mill, Travis Scott, Post Malone, and more for his upcoming album. Check out the Cardi B teaser (below) and stay tuned for the single.

Who else would you like to see featured on Khaled’s album? 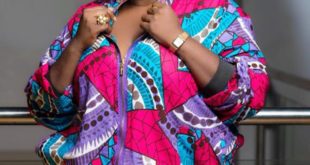