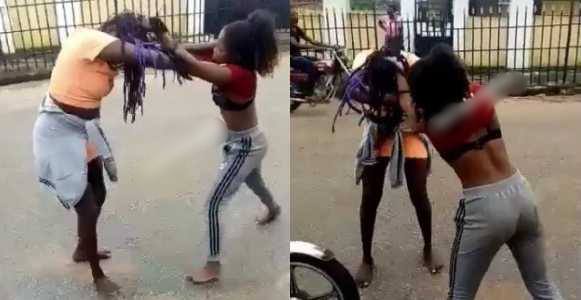 People were given a great spectacle recently after a hairdresser tried to remove the hair she made for a young woman who refused to pay.

The young woman, dubbed a ‘slay queen’ across the internet in the now viral video can be seen dressed in an orange gown, with a grey sweater tied around her waist, while the supposed hairdresser was dressed in a charcoal grey sweatpants, stripped on the side with black lines and a red crop top, that revealed her black underwear.

Also Check:   Strongman Finally Reveals The Only Reason He & Teephlow Are Not COOL
She seemed so determined to pull the braided hair she had made for the ‘slay queen’ who was basically trying to stop her from pulling the hair straight from her scalp which could be dangerous for her.

Everything is impossible until you take the steps to make it possible, be positive in every step you make. Nature will definitely give you the smoothest part of life. Email us on [email protected] Whatsapp: +233540577992
@HiplifeHiphop
Previous Slay Queen Ama Korea Goes WILD As She Twerks Hard In A Tiny Pant (Video)
Next Slay Queens Struggle To Grab “The Cassava” Of A Performing Artist On Stage.