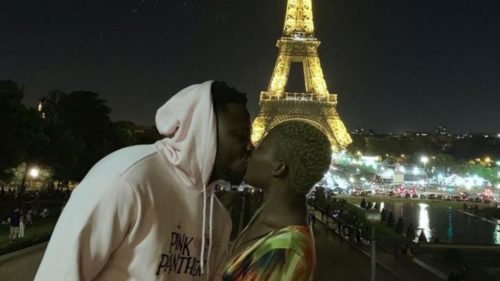 Medikal and Fella Makafui might have already made up on the blind side of many people after their long break-up drama on social media recently.

The pair have been dropping a lot of cues on social media throughout the just ended week which makes one ask the question: What is really going on?

On Wednesday, they both posted messages about missing someone on Twitter and immediately their followers knew they were referring to each other.

Again, Medikal performed at the home game of Legon Cities FC on Friday night and it turns out Fella was also there.

The actress and entrepreneur took to her Instagram page to write the post to reveal that she is already a fan of the football team just after Medikal game them their first home win.

She wrote as caption of the post  “My team @Legoncitiesfc won yesterday ” while she was rocking a brand shirt of the team.

Well, after this post one of her fans replied to the post saying, “Ahhh then my eyes are good i saw someone just like u at the stadium yestii”.

This certainly speaks volumes about what the two have been up to or it might have been a mere coincidence?

Congratulations on your win @LegonCitiesFC ! Wish you the best of luck in all games. I will announce the first 2 winners who predicted the scores tomorrow morning ! Mobile money level ? pic.twitter.com/2az3UvQsv3

Anyway, check out photos Medikal also shared from the stadium below and we promise to update you once they are finally spotted together.