GH¢40million debt: NPP Chairman flights out of Ghana as NIB chases him 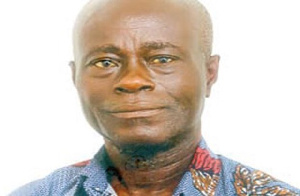 Information reaching Awake News indicates that the Central Regional Chairman of the ruling New Patriotic Party (NPP), Robert Kingsford Jnr Jnr has reportedly flown out of Ghana following the news of his huge indebtedness to the National Investment Bank (NIB) which he has since refused to pay.

Chairman Kutin Jnr’s debt to the state-owned bank has since generated public discussion with many comparing the amount to that of Alfred Agbesi Woyome who the state paid GH¢55 million judgement debt but the payment has since been declared unlawful. Mr. Woyome has been directed by the Supreme Court to pay the money back to the state as his properties are currently on sales by the state to help reclaim the money.

However, in the case of the NPP Regional Chairman who doubles as the Board Chairman of Ghana Maritime Authority is said to have been using the state machinery to frustrate the bank and prevent it from executing the November 2016 court judgement.

Assets of the Mr. Kutin Jnr and his company, Allships Logistics Ltd including six (6) landed properties, one commercial property in Cape Coast all movable properties including trucks, motor vehicles, machinery and equipment were all listed to be sold with “

for Writ of Fifa” but the bank is yet to make any headway.

Also Check:   Our next demo will be massive – Menzgold customers

Sources within the bank said though the listed properties if sold, will not be able to pay for the entire debt owed the bank.

The inability of all the assets of the CEO and the company to offset the said amount is said to have brought shivering and panic withdrawals from the customers who are close relations to some staffs of the bank after they have hinted the financial tsunami that is about to hit the bank. Upon this red alert, shareholders of the bank are said to have embarked on a wild goose chase on all debtors of the bank especially for the case of Mr. Robert Kutin Jnr.

GAT’s intervention to save the NIB

Mr. Kutin Jnr’s debt alone makes about 1/10 of what the Ghana Amalgamated Trust Limited (GAT) Limited used in supporting to recapitalize the bank in order for it to meet Bank of Ghana’s GH¢400 million capital requirement.

The government last year set up the Ghana Amalgamated Trust, a special purpose vehicle, to recapitalize some local banks that needed some top-up. This is to help these local banks to meet the Bank of Ghana new minimum capital requirement of GHc400 million.

The Governor of the Central Bank has disclosed the five banks under The Ghana Amalgamated Trust (GAT) umbrella; ADB, Prudential Bank,, Sahel/Omni Bank and NIB have met the GHc400 million minimum capital recapitalisation demand, following an undertaking by government.