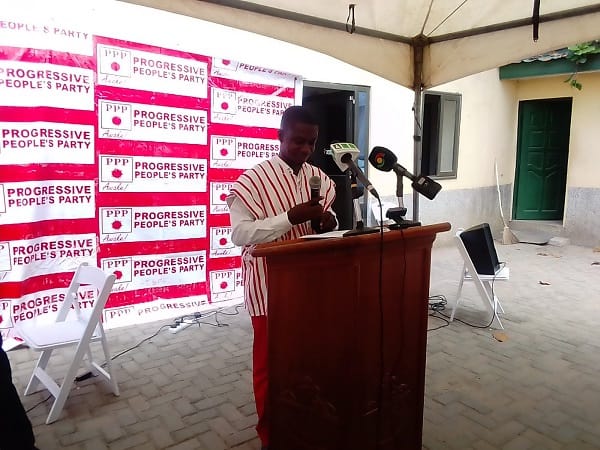 The Progressive People’s Party (PPP) has called for an immediate amendment of the 1992 Constitution before the next Presidential and Parliamentary elections in 2024.

They have also declared December 7th as #FixtheConstitutionDay.

According to the PPP, Ghana is yet to benefit from democratic governance after 30 years.

Addressing the media in Accra, Executive Director of the PPP, Richard Amarh, said after 30 years of the 1992 Constitutional Democracy, there have been massive levels of unemployment, lack of basic social amenities, better educational structures, political accountability, reduction in corruption, and good standards of living.

“After thirty years of democracy, the spectra of massive levels of youth unemployment, excessive executive powers, a compromised parliament, abuse of power, unbridled political corruption, waste of Ghana’s resources, nepotism, mediocrity, mismanagement of the economy, and constant failure of leadership,” he exclaimed.

He described the 1992 Constitution as a colony conquered by the winning political parties and its resources taken for the welfare of a few privileged members of the party in power, depriving the significant majority of Ghanaians the dividends of a well constituted democratic State.

Mr. Amarh revealed that the Party has declared December 7th as #FixtheConstitutionDay to aid in the demand for the amendment to Ghana’s 1992 Constitution.

Also Check:   ‘How can you be hailing Tacha with body odor & bad manners in Ghana?’ – Ibrah One blast Ghanaians

Mr. Armah said, “we will seek the collaboration with Civil Society organisations and other democratic institutions interested in constitutional amendments for this exercise.”, he said.

According to the PPP, the amendment must focus on 5 key areas.

l Return power to the people for all Ghanaians to directly elect their District, Municipal and Metropolitan Chief Executives without any interference from the President and cancel government appointees into the District Assembles;

· Return power to the people for all Ghanaians to directly elect their District, Municipal, Metropolitan Chief Executives without any interference from the President and cancel government appointees to the District Assemblies.

· Prohibit Members of Parliament from being appointed as Ministers of State or MPs must resign from Parliament after their Ministerial appointment;

· Strengthen the office of the Attorney-General by separating it from the Ministry of Justice.

· Introduce a Public Declaration of Assets Regime; and

· Clarify the eligibility of Ghanaians in the Diaspora to hold Public office.

Mr. Amarh said these submissions must be re-looked at to allow Ghana to achieve its democratic gains.

He said the move is to address the checks and balances and issues bedeviling the country which is caused by political mismanagement.

PPP intends to convene an in-depth discussion on Constitutional Amendments and demand reforms on behalf of Ghanaians.

Everything is impossible until you take the steps to make it possible, be positive in every step you make. Nature will definitely give you the smoothest part of life. Email us on [email protected] Whatsapp: +233540577992
@HiplifeHiphop
Previous Election 2024: I want to see Bawumia as the next president; there’s ‘magic’ in him! – Allotey Jacobs
Next Our population would’ve exceeded 35 million if GSS was adequately resourced – NDC MP