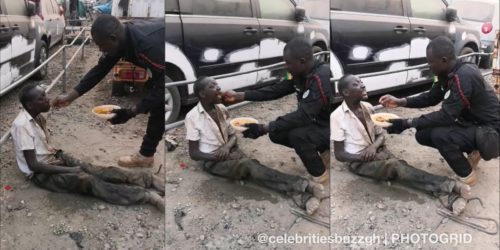 A yet-to-be-identified Ghana Police officer has gone viral on social media for his kind gesture.

According to him, he was on duty when he received a call to assist a caller at Community 19 in Spintex.

Together with his team, they rushed to the scene only to find an old ‘dirty’ man lying on the floor — many thought he was dead.

The team checked his pulse and realised he was not dead as people thought.

The old man was then moved out of the road to a safer place. After resting for a while, the old man opened his eyes and he was asked what was wrong with him.

In reply, he made a sign that he was famished. The police man using his own money got him some bowl of Fufu with soup and fed the old man with his own hands.

@Rexkrampa
Previous ‘Ladies are supposed to get their own money, whatever a guy gives you is extra’ – Efia Odo
Next “Girls, if he doesn’t call you Call him, Men don’t manufacture Airtime” – Lady