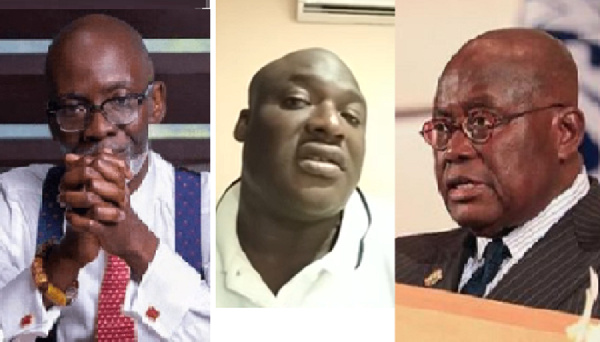 • This is according to a relative of the president, one Kwame Dankwa Ofori-Atta

A supposed relative of President Nana Addo Dankwa Akufo-Addo has warned that level headed and measured as the president is, people in his immediate circle continue to run him down and taint his reputation.

In a 14-minute long video message posted on Facebook, the gentleman by name Angel Nana Yaw Boakye Dankwa Ofori Atta Owauahene Yiadom, alleges that there is rampant corruption and cronyism around the president.

He is worried that the trend could have generational consequences to the extent that no member of the Ofori-Atta or Akufo-Addo family could rise to national political importance after the sitting president.

He particularly singled out Gabby Asare Otchere-Darko, nephew of the president who he said had grown wings and courted so much influence that he was bossing people like him and others around despite doing little compared to what he (Angel) contributed in bringing Akufo-Addo into office.

“We want Ghana to succeed, boys have suffered for this party, we are going to organize a protest for the footsoldiers.

“Gabby and co, where did you come from? How come we are where we are? We are going to do what we got to do for the party, if you want to kill us, go ahead with it,” he is heard saying.

He spoke about what he said was the level of greed, favouritism and cronyism in the corridors of power. “It is disgusting the level of greediness…. Amewu and Bawumia incorporate everyone but Akyems are always with Akyems, why is that?

“We have seen different dispensations where Ghana was for all of us. You are enjoying alone. Akufo-Addo is level headed but for his lieutenants who are running him down,” he added.

He said despite the sacrifices that he had made especially financially to bring the party to power, he was currently living in Amsterdam for reasons of security, warning that if he is attacked at any point, his relations should be held responsible because they have openly threatened him in the past.

Everything is impossible until you take the steps to make it possible, be positive in every step you make. Nature will definitely give you the smoothest part of life. Email us on [email protected] Whatsapp: +233540577992
@HiplifeHiphop
Previous Iggy Azalea, Sophia Scott – Sex on the Beach
Next LGBTQ+ advocates chase French ambassador for hosting Sam George