Breaking News
Home / ENTERTAINMENT / He hurriedly said ‘okay’ when I asked for a breakup, I thought he’d ask for pardon

He hurriedly said ‘okay’ when I asked for a breakup, I thought he’d ask for pardon 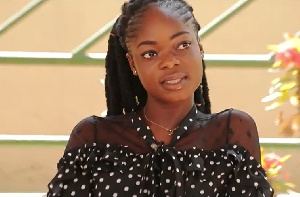 It was a beautiful relationship which was three years old but was shrouded by controversies, leading to a call for a breakup as the lady, Maabenaa, could not tolerate what she describes as “silent torture” any longer. That call; however, she insists, was to drum home the need for the boyfriend to be fixated on their relationship and not necessarily to walk out.

Much to her surprise, the boyfriend, without hesitation, nodded as though he had been expecting her to request a breakup.

“I initiated the breakup because it got to a time, he started giving me silent torture. It went on for a long time and anytime I asked him, he said it’s nothing,” Maabenaa told Ato Kwamena Aikins on ‘The Exes Show’.

“He wasn’t calling me as he used to, he wasn’t giving me attention. So, one time, I called him and said if he thinks he’s not ready, we should end it because I can’t take the torture anymore and he said ‘okay’.

“I thought his response was normal because you know in a relationship, you can breakup like five times so I took it like a joke. After that day, I was waiting for him to call me and say ‘what was that for?’. After two weeks, he hadn’t called and that was when I noticed the breakup was real.”

Also Check:   Michy walks off stage after she was asked how Shatta Wale was at MTN Music Festival

According to Maabenaa, she moved on upon realizing that the relationship had sunk.

While stressing that the said gentleman was a womanizer, Maabenaa maintained that she did not deserve the treatment meted out to her because unlike the boyfriend, she did nothing untoward.

“I didn’t do anything wrong in the relationship. He changed because he got another person. I knew about three ladies,” she said.

“Before I met him, I knew he was a womanizer. I found out he was dating my friend. I didn’t know they were dating so I accepted his relationship. My friend and I weren’t too close at the time so I didn’t know. I found out after people accused me of snatching my friend’s boyfriend. I questioned him and he denied.”

Everything is impossible until you take the steps to make it possible, be positive in every step you make. Nature will definitely give you the smoothest part of life. Email us on [email protected] Whatsapp: +233540577992
@HiplifeHiphop
Previous ‘We cannot be threatened in our homes’ – Bagbin warns pro-LGBTQ+ diplomats
Next Mr Frank – Choobi Feat. Strongman