Mensah, pleaded not guilty to the charge of possessing human parts but the court, presided over by Mrs Dorinda Arthur Smith found him guilty after trial and was convicted accordingly.

Police Sergeant Iddrissu Yakubu who prosecuted, told the court that the complainant, Evans Boakye, a mobile money merchant is a resident at Brimso- Apewosika while Mensah is a known herbalist who resides at Ankaful, a suburb of Cape Coast.

He said on Tuesday March 12, 2019, Mensah gave out fake GH¢500.00 currency notes to one Emmanuel Akonnor for a service rendered.

Sergeant Yakubu said Akonnor unknowingly took the money to a mobile money merchant to deposit into his wallet but the merchant, upon suspicion that the money could be fake, called for his arrest.

He said during investigations, Akonnor mentioned Mensah as the one who gave the money to him to settle his debt.

Mensah was subsequently arrested and a human skull was found in his room during a search.

According to Sergeant Yakubu, Mensah claimed ownership of the human skull but could not tell how he got it.

He said the fake currencies has since been forwarded to Bank of Ghana (BoG)of which a report is being awaited.

Previous General News of Wednesday, 12 February 2020
Next Actress Maame Serwaa causes confusion on the internet with her huge ‘melons’ 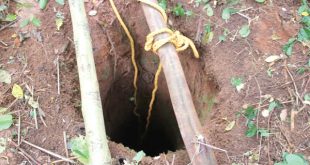