Breaking News
Home / ENTERTAINMENT / ‘How can you be hailing Tacha with body odor & bad manners in Ghana?’ – Ibrah One blast Ghanaians

‘How can you be hailing Tacha with body odor & bad manners in Ghana?’ – Ibrah One blast Ghanaians 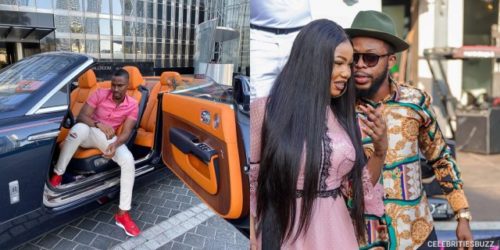 Young Ghanaian Billionaire noted for saying what he feels is always right on the internet, Ibrah One has jabbed Ghanaians for treating former BBNaija Housemate, Tacha like a queen sent from above.

According to a clear shade he threw on Instagram, Tacha has got bad manners and unpleasant body odor yet, Ghanaians are hailing her all over after she visited the country.

Ibrah added that Ghanaians are fond of praising Unnecessary stuff most than the needed.

“Ghanaians love giving attention to unnecessary things and people. How can you be hailing ‘body odor’ who got disqualified because of lack of manners?,” – Ibrah One wrote.

Just yesterday, Efia Odo publicly declared her displeasure over how Ghanaians treat foreigners so well at the expense of their very own people.

Tacha has been in Ghana for exactly 3 days now. She will be around till the 2nd day of December 2019. She was brought down by Despite Media prior to her homecoming.

She partied at Club Onyx a few hours ago alongside Hajia4real and DBlack.

Big Brother Naija 2019 reality show is over but her fans are finding ways to stay in touch with their star.

Fans of Big Brother Naija star and most trended celebrity in Nigeria Tacha, have these force behind her called Titans. These titans have composed their own anthem for her, pledging to be loyal to her any day.

Upon arrival, she was mobbed by some happy fans.

She was also carried in a Limousine to tour some part of Accra.

With Ibrah One joining to share his thought, Tacha will definitely feel the heat.