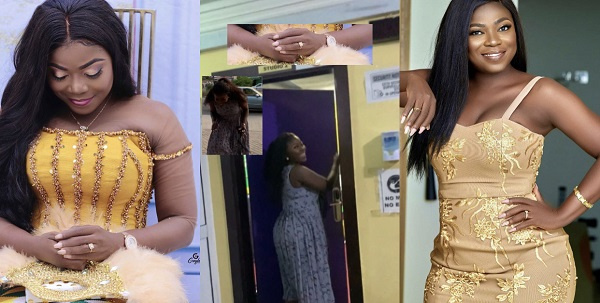 Social media today have been flooded with photos of celebrated broadcast journalist and media personality, Afia Pokuaa popularly known as ‘Vim lady’ as she celebrated her birthday on Wednesday, August 18, 2021.

The question which kept lingering on the minds of some social media users and observers was whether Vim lady had tied the knot secretly as the photos shared by her on her Instagram page appeared to show a bride seated for a traditional wedding with a gold ring on her finger.

Also Check:   I can’t wait to get married so I can sleep with my wife’s sister – Guru

Well, Vim lady who was hiding from the lenses of blogger, Sammy Kay in the building of Despite Media’s Ship House even when Sammy Kay was wishing her well on her birthday.

She has finally confirmed that she is married.

Everything is impossible until you take the steps to make it possible, be positive in every step you make. Nature will definitely give you the smoothest part of life. Email us on [email protected] Whatsapp: +233540577992
@HiplifeHiphop
Previous Man dies after escaping from COVID-19 Centre in Sekondi
Next King Promise – Ring My Line Feat. Headie One