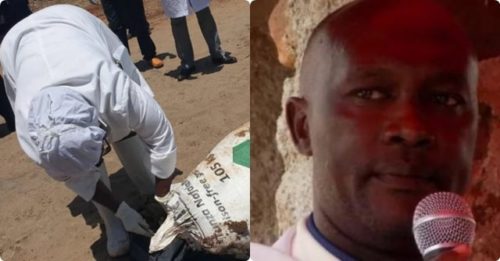 A suspect has told police that he sacrificed Kenyan murdered Catholic priest Father Michael Kyengo after a request from his cult.

The man who was arrested on Wednesday shed more light into the gruesome murder of Father Kyengo who was found with stab wounds.

Reports by the Standard intimated that the suspect confessed to being a member of a cult organization and he gave details of the cult’s website.

The suspect confessed that the cult required it’s members to sacrifice a relative or a close friend in order for them to scale up the ladder and according to Muthini, Fr Kyengo was a close friend to both him and the third suspect.

Mutunga’s application was retrieved by sleuths after logging into the website, where he had explained why he wanted to join the secret society.

The cult promised it’s members vast wealth and plenty of opportunities if they did as instructed.

Mutunga told sleuths he was introduced to the group by other friends who are members of the said cult.

Police seized a book with the names of 86 people and their contacts and people either presumed to be members of the group or potential recruits.

Mutunga was arraigned on Thursday and an investigator told the court that he had confessed to being part of a gang that abducted, robbed and killed the priest.

Police said that Fr Kyengo’s body had been stuffed into a bag after it was cut into pieces. The culprits buried his body in a seasonal river in Embu.