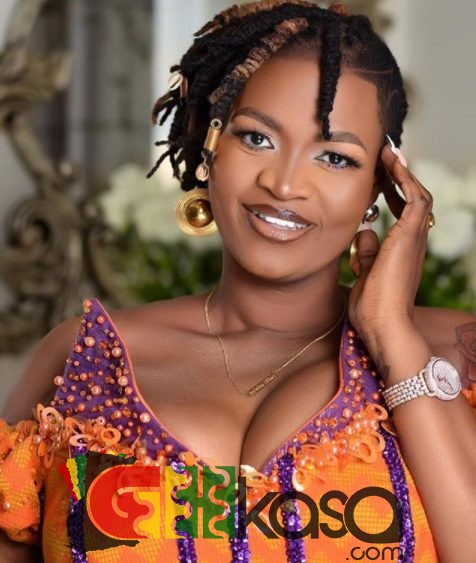 • She has responded to critics on social media after

Music investor, Ayisha Modi popularly known as ‘She loves Stonebwoy’ has disclosed that she has spent a whopping GHC1.7million to aid Moesha Boudong’s recovery.

This comes after she was lambasted by individuals on social media for posting a picture that reveals the current state of the actress who is still recovering.

Scores of social media users have described Ayisha as impatient and going ahead of herself to post a picture of the actress without prior permission from her family.

But reacting to the numerous insults on social media, Ayisha has tagged Ghanaians ungrateful; adding that she has spent a huge sum of money to support the actress.

According to Ayisha, she does not deserve such a cold attitude from Ghanaians after helping Moesha when everyone else deserted her.

Ms Modi said although she has not met Moesha before, she still went ahead and spent almost all her bank savings on the actress out of sheer benevolence.

She also revealed that Moesha for sometime now has been bugging her to tell the world how she(Ayisa) has supported her recovery journey from day 1.

“Moesha was dying and I have managed to save her. Instead of telling me something to uplift my spirit or encouraging me, the evil ones, the not sensible ones are criticizing me. I have never set my eyes on Moesha before yet look at all I’ve done for her.

” If I should disclose the amount of money I have spent and the prayers I have offered to save Moesha, you will never believe it. I have spent over 1.7billion cedis to support Moesha’s recovery. I don’t even think those insulting me even have the kind of money I have wasted on her. I am not that rich but God blessed me with a kind heart. Moesha has been bugging me to tell the world how well I have taken care of her but I have blatantly refused. She said I should even reveal publicly the total amount I have spent on her recovery process,” she stated.

Also Check:   ‘People kill themselves online for nothing sake, Wizkid and I are cool’ – Davido (video)

Ayisha Modi however revealed her real intentions for supporting the actress;

“Throughout my life it was strangers who looked after me. My family did not cater for me as much as they should that’s why I love everybody. I don’t hate, I only speak my mind. I show love and I give abundantly. That’s how I was created. I don’t mind giving out my last penny or giving out my house to the needy. I don’t mind selling my properties to look after strangers. I inherited this attitude from my grandmother who flew a chunk of our family members abroad.

“If I have so much money in my bank account and I cannot help others, then what is the use? If you die one day and God asks what you used your money for? What will be your response? That you spent it in the club on drinks? On useless things? What soul did you save? If someone owns two lands and gives out one to her sister, she will be tagged a lesbian. Nothing moves me in this world. I’m only moved by orphans and the needy.”

It can be recalled that Moesha Boudong was alleged to be battling mental issues after she announced her new Christian journey on social media.

The 31-year-old actress was captured in an earlier suicide attempt video that went viral on social media.

Everything is impossible until you take the steps to make it possible, be positive in every step you make. Nature will definitely give you the smoothest part of life. Email us on [email protected] Whatsapp: +233540577992
@HiplifeHiphop
Previous Adebayor allegedly gifts Funny Face a luxurious vehicle for the third time
Next Meek Mill – Blue Notes 2 Feat. Lil Uzi Vert