Breaking News
Home / ENTERTAINMENT / If You Claim To Be Single Then Return The Cars, Cash And House I Gave You After Marrying My Daughter – Mmebusem’s mother-In-Law Threatens

If You Claim To Be Single Then Return The Cars, Cash And House I Gave You After Marrying My Daughter – Mmebusem’s mother-In-Law Threatens 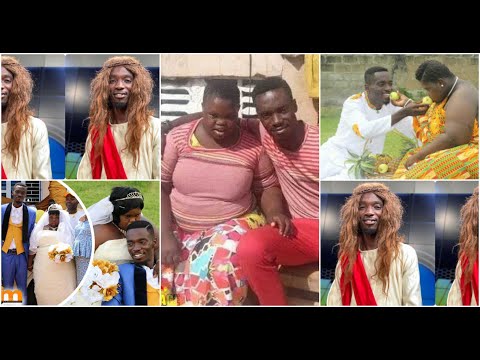 Kumawood comic actor Justice Hymns popularly known as Mmebusem, has landed himself in trouble with his mother-in-law, Afia Serwaa after he denied getting married to her daughter during an interview.

Somewhere in 2016, Mmebusem caused an uproar on social media when wedding photos of him with a bride, Abena Boatemaa, who is a “special needs” girl went viral.

It was again reported a year after the marriage that Mmebusem and his wife had welcomed a set of twins.

However, in a recent interview, Mmebusem indicted that his marriage with his “wife” Boatemaa, was nothing but a big scam.

According to Mmebusem, the marriage was just a stunt to make people accept “autistic” people for who they are and not judge them.

In reacting to Mmebusems’s pronouncements, the mother of the lady has revealed that her daughter is the real wife of Mmebusem and not for a stunt or movie as the actor is suggesting.

According to Madam Afia Serwaa who is the alleged wife of Mmebusem, she gave her consent for the actor to marry her daughter after he convinced her that he was really in love with Boatemaa.

Madam Afia Serwaa also disclosed that after their marriage, she bought a house for them, gave them cars, and cash to start life adding that It is surprising that Mmebusem has turned around to say he is not married to her daughter.

“If Mmebusem has sacked my daughter, I will gladly receive her but I want him to return everything, the cars, house, and every other thing that I bought for him. “Aand for my grandchildren, I know where he sent them so I will go for them and take them along when I return abroad,” she angrily retorted.