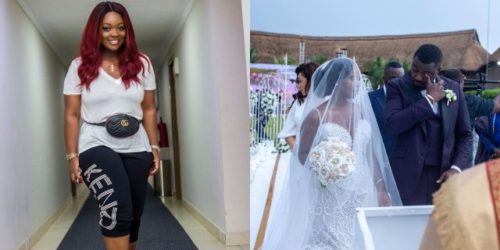 Award-winning Canadian born Ghanaian actress, Jackie Appiah told a story of how John Dumelo allegedly cheated on his wife with a fine girl they met on set.

John Dumelo shared a video of himself and Jackie on his Snapchat handle.

In the video, Jackie told John Dumelo’s fans that she would love to tell a story of how John cheated on his wife.

While telling the story, John Dumelo spontaneously interrupted to probably distort her from spilling the beans.

Jackie, however, did not add whether or not it is a story from a movie they are shooting together or the opposite.

It will be very catastrophic if it isn’t a story from a movie they are both shooting together which has John being the husband of Jackie or any other woman.

John Dumelo is married to a beautiful woman known as Gifty Mawuenya.

They have been blessed with a handsome boy.

@Rexkrampa
Previous Medikal visits Traditional leaders to pour libation on his behalf ahead of his ‘Welcome To Sowutuom’ free Concert
Next ‘I can’t marry beauty, I will marry brains that can help me make money’ – Shatta Wale