JHS graduates will not be awarded diplomas – Ministry of Education 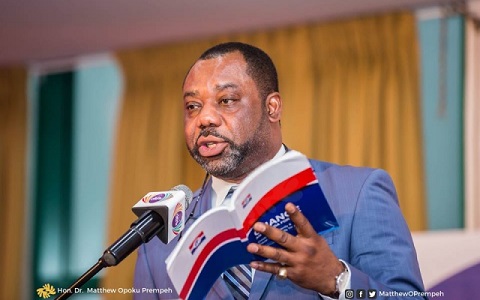 The Ministry of Education (MoE) has denied reports that the government of Ghana is planning to upgrade junior high school certificates to diplomas.

“The curriculum that will appear for the Junior High School will lead to a National Higher Diploma. When you finish Senior High School, you get a National Diploma. It is not everybody who must go to the University straight, but we must prepare our kids for the world of work,” the Minister of Education, Dr Mathew Opoku Prempeh popularly known as NAPO is reported to have said this at the 2019 Danquah Institute Leadership lecture on the theme: “World-Class Education an Imperative for the Next Generation of Leaders”.

But in a statement, the MoE said NAPO’s “comment have been misrepresented and taken out of context.”

“The Minister did not state that Junior High School graduates would be awarded a diploma. Indeed, given the government’s commitment to redefining basic education to include senior high school, in respect of which the Pre-Tertiary Education Bill is in Parliament, it is inconceivable that the Minister would suggest that Junior High School graduates will be awarded diplomas or any other certification to enable them seek work,” the statement said.

According to the Ministry, NAPO mooted the idea of a national diploma for all SHS leavers which will enable them go into work with those desiring to enter university then going on to write the WASSCE in order to do so just as it is done in the USA where all High School leavers gain a national diploma to enable them go into work with the SAT examinations being a further requisite for those seeking to enter university.

Touching on the aspect of media reports that there are plans by the government to reduce the number of years spent by undergraduates at the university from four to three years, the Ministry’s statement said: “The Minister referred to the need for a strong and robust pre-tertiary education structure and noted that with such a system, a discussion on whether the current four-year undergraduate degree could be reduced to three years.

“Indeed, the Minister referred to the fact that prior to the 1987 reforms that saw the shift from the A level to the senior high school system, an undergraduate degree was three years, similar to and that in the case of the University of Ghana in particular, the first year was non-scoring referred to as First University Examinations (FUE).

“The Minister in his speech sought to trigger a national dialogue to potentially reconsider reverting to this undergraduate model, on the basis of a much improved and more robust senior high school curriculum so that students can be adequately prepared for a three-year undergraduate programme.”

The Ministry assured that it will engage relevant stakeholders in its ongoing comprehensive reforms agenda.