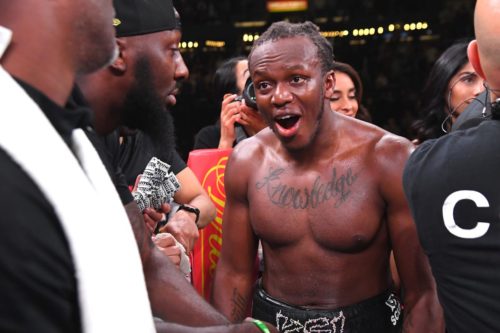 A glitch in the matrix.

Internet personality KSI was pretty taken aback when Rick Ross and LilBaby both agreed to hop on his latest”Down LikeThat” track.

In a recent interview with HipHopDX, the British artist sat down to discuss a number of topics with his newest track being on the agenda. He admitted that he perceived the features to be the result of a “glitch in the matrix.”

“We were just going nuts!” he said of his and his team’s reaction when Rick Ross hopped on. That reaction was amplified when Lilbaby would add a verse tot he track, too.

“It was very different to what he normally hops on,” he added. “But he came in and killed.”

Also Check:   ‘I Wasn’t Cool With Medikal’s “Aboowa, Woto Nono”, But His Friend Is Shatta Wale So I Wasn’t Surprised- Mother Of Medikal

Elsewhere in the interview, KSI addressed the boxing match with Logan Paul that took place between the two earlier this year. KSI proved victorious in the match and has since been presented with the opportunity to possibly face off against other celebrities in the ring as a result. As interviewer Jeremy Hecht presented him with a number of possible opponents, KSI seems pretty confident in his ability to defend his honor even going so far to assert that he could take on all three members of Migos at the same time.

Watch the full interview below.

@Rexkrampa
Previous Governors Ball Won’t Let Minors In Unless Accompanied By Someone 21 Or Older
Next ‘How can you be hailing Tacha with body odor & bad manners in Ghana?’ – Ibrah One blast Ghanaians