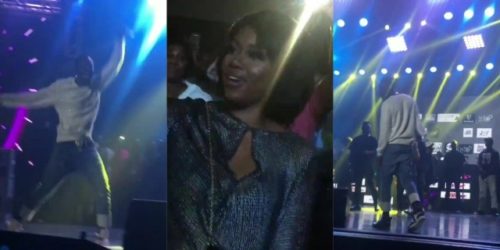 The ‘Dondo’ king had his Disc Jokey dropping one of his old banger and it was nothing but a full fire.

The Auditorium of the Accra Conference Center couldn’t stand the heat that came with it. Most most female celebrities were filmed striving to catch their phones and go online to share their happy mood.

Kwaw Kese killed his performance in a grand-style.

The Pae Mu Ka @ 20 anniversary and concert is to celebrate Obrafour’s journey in the music industry since he came out with his life-changing Pae Mu Ka album in 1999.

The concert, which promised to be a ‘wicked’ one, featured a tall list of artistes such as Stonebwoy, Sarkodie, Ofori Amponsah, Kofi B, Lilwin, Medikal, M.anifest, Bisa Kdei, Ras Kuuku, EL, Wendy Shay, Strongman, Edem, TiC, Efya and King Promise.