Kwesi Arthur reacts to DopeNation’s diss song to him 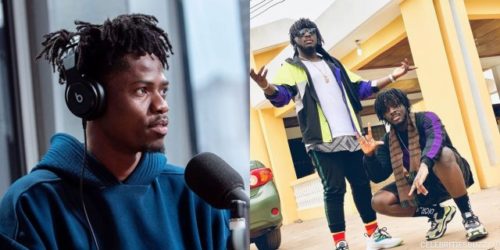 GroundUp Chale’s frontier and BET Nominee, Kwesi Arthur has reacted to DopeNation’s diss song to him some few minutes ago.

Celebrities Buzz in one of our posts revealed that DopeNation has released a career-threatening diss song to Kwesi Arthur dubbed ‘Chairman’.

We explained that there was no mention of Kwesi Arthur’s name in the song. However, the descriptions framed in the form of lyrical bars clearly points to the fact that it is a diss to Award-Winning, Kwesi Arthur.

The main beef according to sources came up as a result of an incident that happened at the SRC Night of Ghana Telecom University is said to have triggered the beef between these artistes.

A source revealed that during the night of the performance, DopeNation was obstructed by one of Kwesi Arthur’s team members and hence their microphone was taken from them and handed over to Kwesi Arthur.

DopeNation in their ‘Chairman’ diss song to Kwesi Arthur used a whole lot of harsh words on Kwesi Arthur which you need to listen in order to attest for yourself.

While reacting to the diss, Kwesi Arthur revealed his happiness in having his song bang loud outside Ghana specifically, in New York.

He added that he is super happy for the support he has been able to gather for himself on the street.

“From Tema to the BIG APPLE! Man, it felt like a dream, it was honestly an out of body experience! Being in New York and people singing along to my lyrics! these are blessings i can only be grateful to the almighty for! thank you God,” – Kwesi wrote.

“thank everyone that presses play on my songs and makes this reality possible for me☝??.” – Kwesi added.