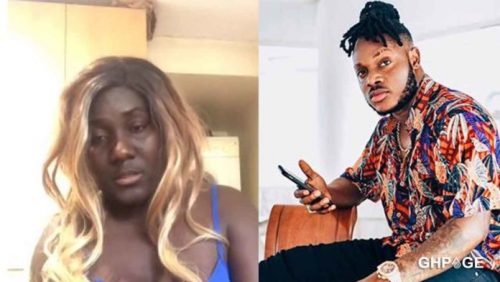 2 days ago, a video was in fast circulation on social media that captured an angry young beautiful lady raining curses on Keche Andrew(the husband of Joana Gyan) with 3 eggs.

In the video Ghpage News sighted, the lady who rained curses on the musician also asked the gods to kill Keche Andrew and his close friend(maybe that particular friend knows about this) as well.

The lady identified as Adwoa Spendlove happens to be the ex-girlfriend of Keche Andrew. And according to her, Keche Kofi Andrew as she calls him broke her heart after he left her to marry millionaire Joana Gyan.

Adwoa Spendilove as captured in the video cursed the singer on the grounds that he leaked her nude photos she privately sent to him in his DM to a blogger(name unknown yet) and also shared it on Facebook just to disgrace her.

Her outburst on social media according to her could have been controlled but due to how fast her nude photos are trending she had to come out and curse him so that it would deter others not to further spread her nudity on the internet.

Following the first video, Adwoa has in a new video giving an extensive account on what really influenced her actions on social media and how Keche Andrew for the avarice for money broke up with her to marry another woman-a rich one as such-.

Heartbroken Spendilove narrating her sad experience said she did everything for Keche Andrew because she loved him so much that even if he (Andrew) had asked her to do the worst she would have.

Their relationship then, was a lovely an envious one as the two had the best moments as lovers almost every day.

According to the lady, Keche went to the extent of promising her of marriage as soon as he ‘blows’. The lady having a clear mind towards him financially supported him to stand on his toes in the music industry thinking they were going to settle down.

Adwoa Spendilove, sadly revealed that their blossoming and lovely relationship started to face some hitches right after Keche Andrew travelled to Dubai and began posting a different lady (Joana Gyan).

The lady got worried and inquired but Keche lied and told her she had nothing doing with her, but just a normal friendship vibe.

This did not end there as it went on for sometime before a friend close to Keche told her that Keche Andrew was going to get married.

She said she got irked and confronted the lady Keche Andrew was about to marry but was slapped with an unpleasant response, one she couldn’t share in the video. A bitter and serious one I guess.

WATCH THE VIDEO BELOW:

Spendilove, from all indications is very hurt about how events turned up, because she was not expecting such a big blow this soon.