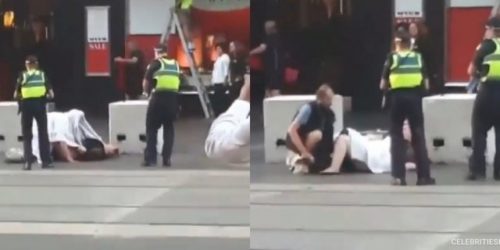 Some lovers has got no shame at all. They were caught having sex in the middle of a busy road.

While covering themselves with a cloth, the two seemingly ‘uncivilized’ lovers could be seen unleashing their ‘Atopa’ skills.

Their move distorted the smooth moving of vehicles and that prompted the Police officials called to the venue to take action.

The man after noticing how ready the law enforcers were to grab him and let the law take its course, tried to escape

He was however apprehended and brought to book.

Many people cannot believe their eyes especially judging from the fact that we are in a modern world.