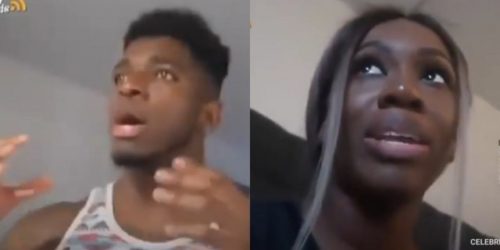 A jealous boyfriend almost sent her girlfriend into her early grave after she pranked him by wearing her ex-boyfriend’s boxer shorts.

The boyfriend who looked stout and well built couldn’t fathom why his girlfriend would be wearing an outfit belonging to her ex.

He commanded her to go and remove the boxer shorts or face his wrath if she declines upon noting it.

Unknowing to him, her girlfriend was just pranking him to see his temperament.

After getting heated up, he later got aware that he was being fooled – but by then, he had already slapped his girlfriend at his face.

Some pranks could cost a life.