Ministry of Information engages journalists in Western and Central Regions 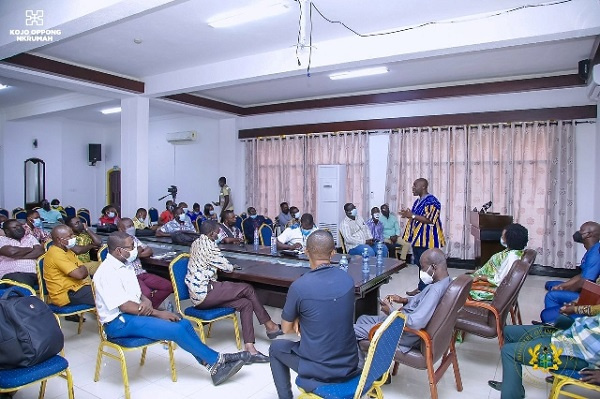 The Ministry for Information has held engagements with journalists in the Central and Western Regions as part of the government’s efforts in taking inputs from relevant stakeholders amid ongoing discussions to restructure the country’s media landscape and provide media personnel with the needed support in their day-to-day activities.

Sector Minister Kojo Oppong-Nkrumah told the journalists in Cape Coast and Takoradi that the government remained committed to creating a conducive environment for the practice of their profession.

The tour is a continuation of similar exercises by the ministry to the regions in the north in May this year.

Officials from the ministry led by Mr. Oppong Nkrumah engaged the journalists in the two regions to acquaint themselves with the challenges they face in their field of work and assured them of the government’s commitment to their welfare.

He said the government was concluding the formation of the executive arm of government to get governance running at the local level.

“You will notice that we are coming to the end of the construction of the executive arm of government with the appointment of MMDCEs so that full work commences particularly at the local levels. The primary focus of the government is to get the economy back on track post-Covid so that we bring more developments and jobs and concentrate on improving the quality of life of Ghanaians,” he said.

The Minister charged the media to help the government create awareness on security challenges currently facing the sub-region and report suspicions to the security agencies.

“We have the responsibility to raise awareness for the Ghanaian public. We need to bring some of these things to the attention of security agencies.”

He also updated journalists on work done so far on the two media support programmes – Coordinated mechanisms for the safety of journalists and Media Capacity Enhancement Program.

The Minister and his delegation also toured some agencies under his ministry specifically GBC and ISD installations as part of the ministry’s reorganization drive.

The delegation earlier paid courtesy calls on the Omanhene of the Ogua Traditional Council Osabarimba Kwesi Atta ll in Cape Coast and the paramount Chief of Essikado, in the western region Nana Kobina Nketsia V.

Both traditional leaders praised the Information Minister for his dedication and remarkable performance as the spokesperson of government operations and encouraged other young appointees to emulate him.

The delegation included directors of the Ministry and government spokespersons.

Everything is impossible until you take the steps to make it possible, be positive in every step you make. Nature will definitely give you the smoothest part of life. Email us on [email protected] Whatsapp: +233540577992
@HiplifeHiphop
Previous Video emerges of Takoradi ‘kidnapped’ woman with baby bump
Next CCTV captures man stealing laptops at BOST head office