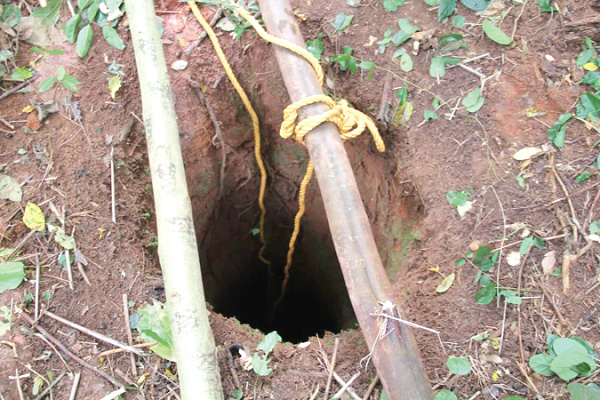 Three years after allegedly murdering a man, Yakubu Atubiga, a resident of Fawobotoso in the Ashanti region, has led the police to exhume the skeletal remains from where he left them.

The police, according to reports by GraphicOnline, disclosed that the suspect who initially denied killing Martin Kwabena Amuzu, admitted to the crime after further interrogation.

The 38-year-old, also known as Phobia, is said to have led police to an anthill where he buried the head of the deceased and subsequently to an abandoned well where he dumped the other parts of the body.

Speaking to the media, Public Relations Officer of the Ashanti Regional Police Command, Assistant Superintendent of Police (ASP) Godwin Ahianyo said the police in Tepa received intelligence on July 7, 2020, that the suspect had shot and killed the late Amuzu on a farm at Kwame Baah cottage.

This information came to the police almost three years after the crime as the deceased, who was then 32-years, was reported missing by one Mr. Gyau in August 2017.

ASP Ahianyo noted that Atubiga was arrested upon the tip-off, together with the deceased’s former employer and one Akwasi Twumasi.

ASP Ahianyo stated that the police together with officers from the Environmental Health Unit and the Ashanti Regional Crime Scene Team exhumed the skull on July 20 after securing an exhumation order from the Tepa District Court.

Also found at the scene were a pair of white rubber slippers and a multi-coloured T-shirt suspected to belong to the deceased.

The suspect took the police to the abandoned well the following day to retrieve the other skeletal remains of the deceased he dumped there.

The bones and the skull had been deposited at the Tepa Government Hospital for preservation and DNA analysis.

Previous Kanye West Gets A Visit From Justin Bieber & Damon Dash At His Wyoming Ranch
Next Fameye – Bar Man (Prod. By Kin-Dee)