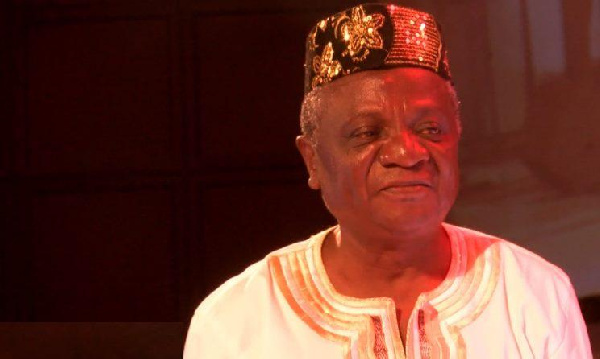 On the back of reports that highlife music legend Nana Kwame Ampadu has died, his son and grandson have been contradicting each other.

Speaking on Hitz FM’s Daybreak Hitz, the grandson whose name was not mentioned said Nana Ampadu died on Tuesday, September 28, 2021, at about 6 AM. Sounding sorrowful in his response, the grandson could not disclose what led to the supposed demise of Nana Ampadu but said the legend had been sick for a while.

He further noted that a family meeting was underway following the disturbing news.

Considering that panellists on the show had been waiting for a confirmation from a family member in order not to goof in their utterances, the statement from the grandson son paved the way for tributes.

In a turn of events, the host of the show, Andy Dosty, announced that a son of Nana Ampadu had just sent a message to his producer that the legend is not dead but is in a critical condition at a hospital.

This led to a decision to end the discussion.

The industry was hit by news of Nana Ampadu’s demise on Tuesday. Many stakeholders subsequently joined the chorus of tributes as they bid him farewell. Others were, however, in disbelief and suggested it could be a hoax.

Everything is impossible until you take the steps to make it possible, be positive in every step you make. Nature will definitely give you the smoothest part of life. Email us on [email protected] Whatsapp: +233540577992
@HiplifeHiphop
Previous Gospel musicians back then were more committed to the ministry – Noble Nketiah
Next DOWNLOAD MP3: Giddy denkye Sika Asem Ft. Ben Brainy X Kwame Truuth