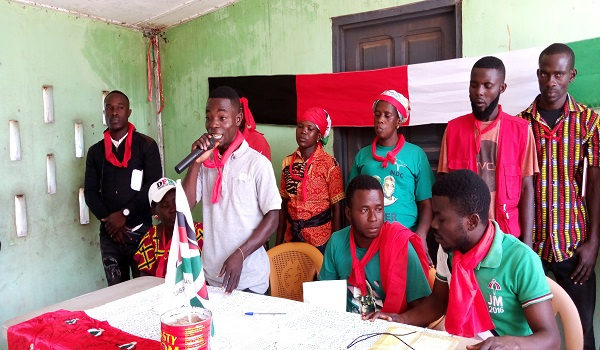 The Branch Executives of the opposition National Democratic Congress (NDC) in Evalue-Ajomoro Gwira Constituency of the Western Region have debunked news report circulating on social media that aspiring NDC parliamentary candidate for the area, Kofi Arko Nokoe is a member of the New Patriotic Party (NPP).

In a news article written by one Ato Kuntu Blankson, published by Ghanaweb on Wednesday, August 14, 2019, described Kofi Arko Nokoe as a mole in NDC.

According to the story, “He is known to have partnered some key members of the governing New Patriotic Party (NPP) with key among them as the current Member of Parliament for the Evalue Ajomoro Gwira and former Tourism Minister Madam Catherine Afeku and the current Municipal Chief Executive, Mr Frank Okpenye who sponsored and partly participated in the demonstration against the NDC then in government, making it unpopular”.

The Evalue-Ajomoro Gwira Constituency is one of the 17 Constituencies that National Executive Committee (NEC) of the party put on hold for unknown reasons but later cleared the road for the primaries.

The Vetting Committee is expected to vet the prospective aspirants on Monday, August 19, 2019 at AYA Community Center in the Ellembelle District.

Mr. Kofi Arko Nokoe who has been tipped to win the upcoming parliamentary primaries is contesting with two others.

Speaking at the press conference held at Axim Community Center Friday, August 16, 2019, the Branch Secretary of Brawire Central, Felix Bright Mensah alias “Arrested” made it categorically clear that Mr. Kofi Arko Nokoe was not an NPP member and could never be an NPP member.

He disclosed that Mr. Kofi Nokoe in 2014 was the ‘Master of Ceremony’ (MC) during the Constituency Elections.

“The question is how can an NPP member be made MC for an NDC function”, he quizzed critics.

He opined that “in Mr. Kofi Arko Nokoe’s University days at the University of Ghana, he was a member of TEIN, and had disseminated Party issues to students on campus”.

He noted that “In the recent restructuring of the party at the Branches throughout the country, members were registered at the various Branches including Mr. Kofi Arko Nokoe, who registered at WTI branch in Axim, we are asking his critics to find out before criticizing him.

According to him, Mr. Nokoe during the just ended Limited Registration Exercise supported the party financially and used his own vehicle to support the party.

Responding to a petition sent to the leadership of the party against Mr. Kofi Arko Nokoe’s candidature, Bright Mensah observed “We the Branch Executives are advising the faceless individuals behind this petition against Mr. Arko Nokoe demanding his disqualification. Mr. Nokoe is a household name in the Constituency, his leadership and unifying skills is second to none”.

He continued “They should stop using Mr. Albert Cudjoe as the writer (scapegoat) of the petition. We know them by their actions, inaction, statements and write-ups on social media and other traditional media”.

He added “For the sake of the party’s unity that will enable us win power 2020, we will not mention their names, we are advising them to focus on issues that will help their preferred candidate win the primaries rather than destroying the party not Mr. Kofi Arko Nokoe. Their negative attitude can cause the party in the Constituency”.

He, therefore said they (Branch Executives) had confidence in Mr. Nokoe’s exploits of winning the parliamentary seat in the upcoming 2020 general elections.

He has accordingly appealed to all delegates of the party to know that Mr. Nokoe stood for development and had the good people of the Constituency at heart.

He emphasized that “Some critics of Mr. Kofi Arko Nokoe say he led a demonstration against the former President His Excellency John Mahama and NDC that led to the defeat of the party. We the Branch Executives want those critics to know that, Axim Youth Alliance (AYA) is a pressure and development group that has its own constitution and leadership led by the president. If the AYA decided to create awareness on the bad nature of the Axim town roads through a peaceful demonstration, why should Mr. Kofi Arko Nokoe’s critics hold him alone liable”.

He, therefore put it on record that the NDC did not lose the parliamentary seat in 2016 to Catherine Afeku of NPP due to Mr. Nokoe but rather lost the seat because of disunity and apathy among the party members. “We want to let them know that the above argument doesn’t hold legally”.

He stressed that “Demonstration is one of the legal tools used by individuals or groups of people to drive home issues affecting leadership of a country or an institution, by this, we are not supporting that demonstrations should be organized to destroy our party but rather we want the public to know that Mr. Kofi Arko Nokoe’s critics are not telling the truth”.

On behalf of about 500 Branch Executives and over 1,000 NDC sympathizers who supported the press conference, he appealed to the Constituency, Regional and National Executives to investigate the petition to know the background of the petitioners before considering any disqualification.

He said if the leadership of the party failed to investigate the petition well and go ahead to disqualify Mr. Kofi Arko Nokoe, the decision could force them not to campaign for both John Mahama and the parliamentary candidate in 2020.

He, therefore seized the charged atmosphere to appeal to the leadership of the party to organise a clean, free and fair primaries for all.

“We the Branch Executives are appealing to the Constituency Executives to organise a clean, free and fair election for us all to help fight together for the needed unity that had eluded this Constituency for long”, he appealed passionately.

In conclusion, he said “… we the Branch Executives are appealing to all delegates to vote Mr. Kofi Arko Nokoe, the incoming redeemer of the Constituency to recapture the parliamentary seat from the NPP. We are also appealing to all parliamentary aspirants to organise their campaign on issues devoid of personal attacks and backbiting and unnecessary insults, if the campaign is organised on issues, it will bring about party cohesion and unity leading to winning power in 2020”.

The Evalue-Ajomoro Gwira Constituency is one of the swing Constituencies in Ghana where no incumbent Member of Parliament has ever won it back to back.

However, after the defeat, Hon. Catherine Afeku vowed to break that jinx in 2020 but the NDC is also saying they are going to win the seat back in 2020.