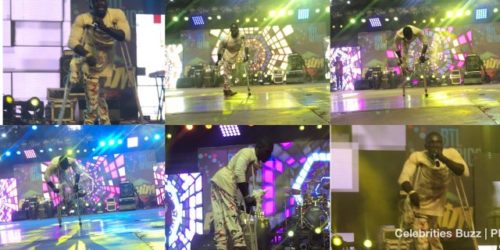 Ashaiman To Da World held yesterday witnessed some magic from a ‘Physically challenged’ brother who is a musician based in Ashaiman, Listowel.

The artist right upon stepping on stage had a whole lot of stars supporting and showing him love.

He seems to have a huge love from his own community indicating he has got a brighter future.

While performing his songs, Listowel at a point in time used his crouches to support himself and did some ‘Michael Jackson’ moves.

It was very good of the organizers for allowing Listowel to showcase his talent.

The likes of Strongman, Sarkodie, Obibini, Eno Barony, eShun, Quamina Mp all passed through the Concert.