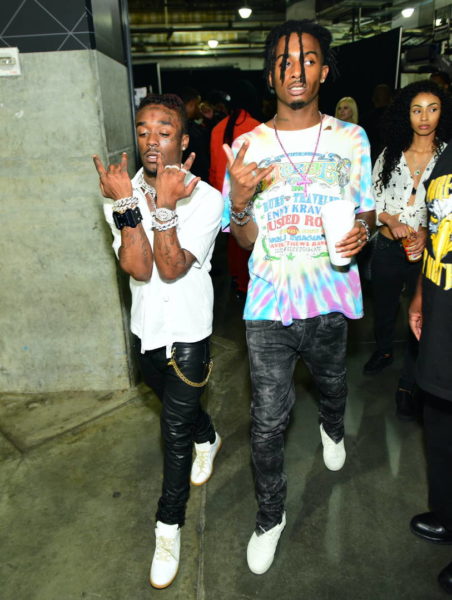 Lil Uzi Vert and Playboi Carti hugged it out on stage at Rolling Loud.

Over four years ago, two of the (then) hottest newcomers into the game announced that they would be joining forces for 16*29, as well as an accompanying tour. Unfortunately, those plans ultimately fell through as both Lil Uzi Vert and Playboi Carti began feuding. The two collaborators ended up taking shots at each other on social media while fans pleaded for both of them to make up.

It seems like it’s all water under the bridge at this point as the two finally reunited in front of the Rolling Loud crowd on Friday (Oct. 29th). During Carti’s set at the New York edition of the festival, Uzi came out where they blessed fans with a performance of their Die Lit collab, “Shoota.” To make it official, Playboi Carti gave Uzi a massive hug as he stepped on stage. Fans were ecstatic to see the two rappers together again on stage. As Rolling Loud tweeted from their official account: “FEELS LIKE 2017.”

The two rappers have subtly hinted at making amends behind the scenes over the months. In April 2020, Uzi said that he and Carti had squared up to settle their differences. Then, in August, Uzi tweeted out the title of their apparent joint effort, leading to even more speculation that they’re no longer feuding. A month later, Uzi and Carti were spotted outside in matching Narcissist jackets.

Check out the footage of Carti and Lil Uzi’s reunion below.

Everything is impossible until you take the steps to make it possible, be positive in every step you make. Nature will definitely give you the smoothest part of life. Email us on [email protected] Whatsapp: +233540577992
@HiplifeHiphop
Previous YG – Sign Language
Next Lil Win – Pepper Me Ft Lex Wani