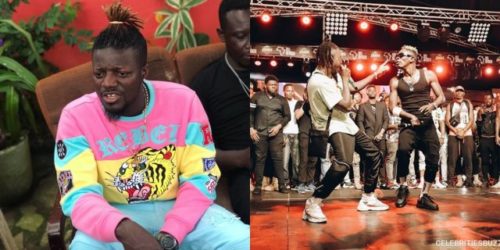 Former best friend of Shatta Wale, Pope Skinny has reacted to the news of Shatta Wale and Stonebwoy performing together at the just ended ‘Ashaiman To Da World’ Concert.

Stone and Shatta reignited their unity by performing alongside each other.

In what looked like a battle, Shatta and Stone wowed their united fans in a special way.

Prior to Shatta’s coming to the event, many fans were in high anticipation of his surprise visit.

Right after rocking Medikal’s ‘Welcome To Sowutuom’ show, he pulled up in his white Toyota Landcruiser and shocked all BHIM Natives.

Pope Skinny, a friend turn enemy who once contributed immensely to Shatta Wale’s big blow in Ghana took to Snapchat to comment on it.

He said it is very good for Ghana music.

“Shatta Wale and Stone Boy perform together. Thats lovely for the industry. I love it.”

@Rexkrampa
Previous ‘Physically challenged’ musician, Listowel wows fans at Stonebwoy’s ‘Ashaiman To Da Waorld’ with his performance
Next Fella Makafui subtly reveals she is pregnant for Medikal & celebrates him for shutting down his Concert