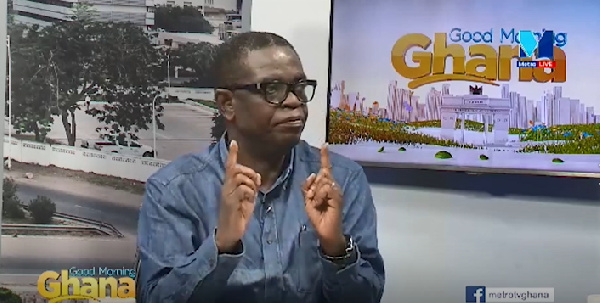 Managing Editor of the Insight newspaper, Kwesi Pratt Jnr, has expressed solidarity with North Tongu Member of Parliament, Samuel Okudzeto Ablakwa, over his ‘activism’ in the matter of luxurious presidential travels.

According to Pratt, he believes that most of Ablakwa’s colleagues on the Minority Caucus will not fully agree with him on the fight that he has taken upon himself in the last few months.

“I can bet you that Okudzeto is on his own,” Pratt stated on the September 29 edition of Metro TV’s Good Morning Ghana programme, rhetorically quizzing show host Randy Abbey: ”You think that Okudzeto is speaking for the 137 minority Members of Parliament?”

Assured by Randy that Ablakwa had the support of a sizeable number of his colleagues, Pratt stated: “But you wait and see how they use that their 137 in Parliament over this issue… what gives you hope? he asked again.

“Okudzeto is on his own, he is just talking, who will agree with him? Poor boy, poor boy, he is out there making noise (alone),” Pratt added.

The veteran journalist joined the school of thought that has called out the government over an announcement that the purchase of a bigger presidential jet was in the offing.

The announcement, from the Director of Communication at the presidency, comes in the wake of renewed disclosure by Ablakwa on what he calls luxurious chartered trips of President Nana Addo Dankwa Akufo-Addo.

His major concern is that these trips which cost the taxpayer millions of Ghana cedis are undertaken despite the country having a functional presidential jet which is in mint condition.

Pratt’s concerns of lack of cooperation from the Minority has however been doused by the Minority Leader in Parliament, Haruna Iddrisu.

Speaking on Citi TV’s Point of View programme on Wednesday evening, Haruna said Ablakwa had the full backing of the caucus in his crusade.

“I think he (Ablakwa) is the ranking member for the committee on foreign affairs and therefore he reflects our position on issues affecting the pursuit of foreign policy and diplomacy,” Haruna said.

Everything is impossible until you take the steps to make it possible, be positive in every step you make. Nature will definitely give you the smoothest part of life. Email us on [email protected] Whatsapp: +233540577992
@HiplifeHiphop
Previous 0% public sector pay rise: ‘It’s not your fault’ – A Plus hits at Prof Adei
Next OSP had no staff – Kissi Agyebeng