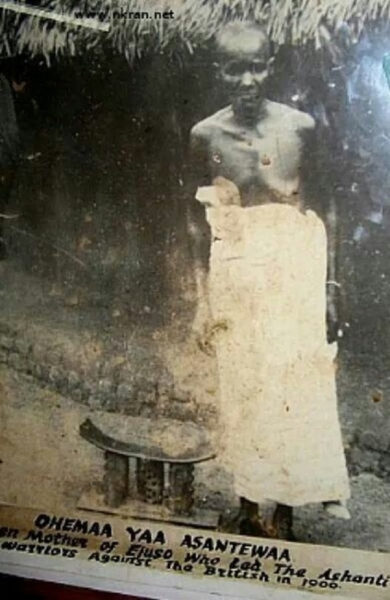 On 19th September, 2021, the GhanaWeb, an online news portal, carried a story regarding an interview granted by our own Prof. Bafour Dua, a political historian. In the story widely shared online and on various WhatsApp platforms, the good Professor sought to rewrite history by claiming that the famous Queen of Edweso, Nana Yaa Asantewaa, was merely a “Gyasehemaa of Besease”.

Ordinarily, I should not be joining issues with my dear Professor who, by dint of tedious research, has gained various academic titles and pursued an eventful career in Ghana’s political landscape.

However, as a cultural researcher who has spent valuable time exploring and analysing various inter-textual and oral traditions on Asante culture and history, it becomes an irresistible duty to put matters into proper perspective to ensure that the legacy of Yaa Asantewaa is preserved for posterity.

Now, I do not intend to bore anyone with the history of the people of Edweso, and how they settled on a land bought from Adontenba Akyawkromhene. Nor do I need to talk about how the famous Kwakye Dapon and Hwereso Okeseɛ had to be chased away from the now Edweso vicinity.

Although Asante is a matrilineal society, it is common knowledge that some traditional stools in Asanteman have not been vested in any specific family lineage/household. Such stools include Konti, Akwamu, Gyase and Akyempem Stools. In effect, these stools do not have female occupants (Ahemaa).

Nonetheless, there seem to be a recent proliferation of some Akan states creating phantom offices like “Krontihemaa”, “Gyasehemaa” which is historically and culturally incorrect.

It is therefore surprising that the Prof. will suggest that Yaa Asantewaa was a “Gyasehemaa” for the Edweso State. Indeed, the term ‘Gyasehemaa’ is a recent coinage and has no significance in Asante historiography.

Needless to emphasise that in the archived histories of the Edweso stool (which can be accessed at Manhyia Archives), Nana Yaa Asantewaa is regarded as a royal and Queen of the Edweso state.

Prof should not forget that Besease is one the key areas where the royal Asona family settled during their long emigration from Adanse Akrofrom and Kokobiante.

Besease was only placed under the Edweso Traditional Council by the British. In this regard, it is instructive to highlight the role played by Nana Boadu, Beseasehene, during the war of resistance in 1901. Nana Boadu was said to be one of the principal emissaries sent by Yaa Asantewaa to contact allies during the war.

If Yaa Asantewaa was a ‘Gyasehemaa of Besease’ as being purported by Prof. Dua, then the Beseasehene would have been her overlord. Suffice to state that it is unthinkable to have a subservient Chief appoint an overlord as an emissary.

We are told that Professor Dua traces his roots to Besease, and it will serve a good deal of justice to history if he kindly revisits his information sources, and retracts the poisoned narrative.

In October, the Royal Society for Asante Culture and History (ROSACH) will have detailed discussions on the legacy and impact of Yaa Asantewaa in pre-colonial and contemporary times. We extend fraternal invitation to our dear Professor.

Everything is impossible until you take the steps to make it possible, be positive in every step you make. Nature will definitely give you the smoothest part of life. Email us on [email protected] Whatsapp: +233540577992
@HiplifeHiphop
Previous Our church leaders are hypocrites; some are gays – Maurice Ampaw alleges
Next I’ve produced the highest number of hit songs on the continent – Appietus implies