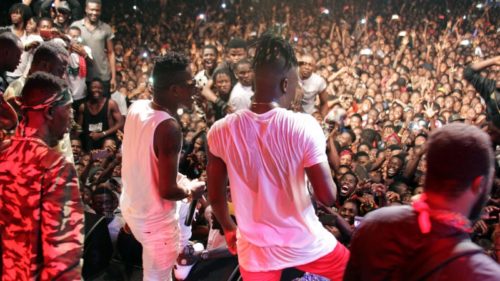 As earlier indicated by Celebrities Buzz that Shatta Wale will be surprising his former enemy turn best friend, Stonebwoy at his ‘Ashamain To Da World’ Concert came to light.

In our previous post, we stated clearly that Shatta Wale has got plans to perform alongside Stonebwoy.

Shatta Wale stormed Saka Saka Park like a real boss and gave out the best of the best performance alongside 1Gad.

READ ALSO:  Davido goes topless as he shows off his cute 2 packs (Photo)

Wale and Stonebwoy performed their hit songs each for minutes.

Stonebwoy and Shatta quashed their beef quite recently after their VGMA fight nearly ended bloody.

Ever since they made peace, they have been just playing a peaceful game together.

Shatta Wale’s coming to 2019 ‘Ashamain To Da World’ was the greatest of all to most Ghanaians and BHIM Natives present.

READ ALSO:  Nana Tornado list all the pastors who allegedly wanted to have sex with Afia Schwarzenegger before giving her money

In fact, they displayed the beauty of Unity today during the Concert.

‘Ashamain To Da World’ Concert 2019 had the event ground filled to its maximum capacity.