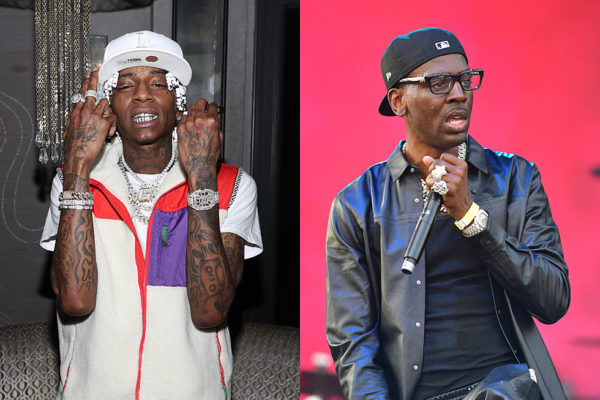 Beef has erupted between Soulja Boy and Young Dolph.

Things appear to have started on Wednesday (Nov. 10), when Dolph boasted about the money he’s drawing in for shows as well as his independent status. “How da fuck im a independent artist and gettin 100rax plus for a show,” Dolph wrote on his Instagram Story. “How da fuck @keyglock got more cars & ice than you & your ceo?”

It appears Soulja’s comments may have led to someone on Dolph’s label reaching out to Soulja on social media. The “Rick and Morty” rapper blasted Dolph and his team on Instagram afterward.

“Man, Young Dolph, if you don’t get your bitch ass artist out my muthafuckin DM, nigga,” Soulja snapped. “Fuck you talkin’ bout, nigga? Nigga thought he was bulletproof ’til he got shot like Dolph, nigga. Fuck you talkin’ ’bout, nigga? Ain’t you the nigga getting shot at 100 times? Ain’t you the nigga getting popped and shot at all the time? Y’all bitch ass niggas better get out of my DM. Fuck Paper Route. Fuck Key Glock. Fuck Young Dolph. Fuck all y’all niggas.”

Soulja is referencing the time in 2017 where Dolph’s car was shot at over 100 times in Charlotte, N.C., and the time Dolph was shot at in Los Angeles a few months later.

SB later shared a DM conversation between him and Paper Route Empire artist Key Glock. In the screenshot, Soulja asks the Memphis rapper, “What u wanna do?” and Key presumably sarcastically responds, “Nothing!! I’m scared.”

Everything is impossible until you take the steps to make it possible, be positive in every step you make. Nature will definitely give you the smoothest part of life. Email us on [email protected] Whatsapp: +233540577992
@HiplifeHiphop
Previous Austrian Brothel Offering Vouchers for Anyone 18+ Who Gets COVID Vaccine
Next Kwabena Kwabena – Konkonsa Ft Shatta Wale