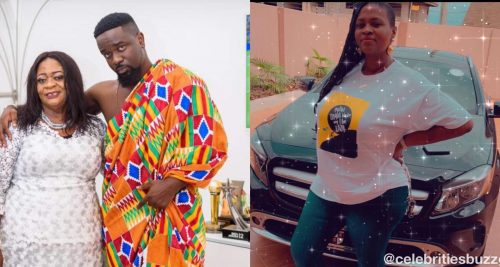 Stonebwoy’s hype woman Ayisha Mordi has landed insults on Sarkodie’s mother a few minutes after Sarkodie finally came out to speak on issues surrounding Stonebwoy slapping his manager Angelo which got his eye damaged.

Sarkodie in his press release said he doesn’t want to go back and narrate how everything happened but one thing he’ll like address is how the ‘Public Relations’ of some musicians talk anyhow.

He noted that it’ll be good if these people responsible for speaking on behalf of these celebs learn to do it the right way.

Soon after the video dropped on Instagram, some concerned people tagged Ayisha Mordi that she should pay heed to Sarkodie’s advice because ever since the issue started, she has been ranting on the radio in a matter which people find distasteful.

Ayisha happened to have seen the comment of one concerned person who tagged her to listen to Sarkodie’s advice.

In response, Ayisha insulted the person’s mother and Sarkodie’s mother — calling them Kwasiaa (which means fool) 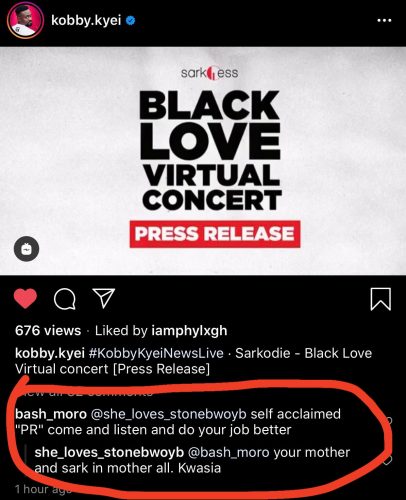 This woman must be called to order. Because she’s gradually losing it.

Young Blackboi Amg Napiboi is an experienced Public Relations Officer and Author with a demonstrated history of working in the music industry. Notable among his huge repertoire of artistes worked with are Morgan Heritage (Grammy Winners), Rocky Dawuni (Grammy Nominee, 2015), Samini (MOBO Winner - 2006, MTV Awards Africa Winner - 2009) and Stonebwoy (BET Best African Act Winner - 2015). Other mainstream artistes of great repute he has worked with are EL, Eshun, Kula, (just to name a few), who have all won multiple awards under Vodafone GHANA Music Awards (VGMAs).
Previous Stonebwoy and Adebayor take friendship goals to another level
Next Fireboy DML – Apollo Album