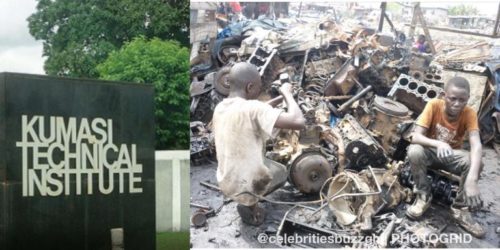 A report by Ivan Heathcote–Fumador indicates that authorities of the Kumasi Technical Institute are yet to come to terms with the impetus of students who dislodged one of the school’s gates for sale.

The metal gate was found in the custody of a scrap dealer after the students went on a rampage over the weekend attacking teachers and vandalizing school installations.

The students were protesting what they called ill-treatment from a Senior House Master who confronted their colleague for wearing unapproved attire during preps.

A clearly angered teacher who narrated the rather baffling loss of the school’s gate to Ultimate News on condition of anonymity disclosed that the students had handed over the gate to the scrap dealer and had promised to come see him the next day in the morning; to negotiate a good price for their merchandize.

“The are technical guys so they knew how to take off the gate. They even attempted removing another gate but they couldn’t because it was cast in the concrete slab,” he recounted.

It appears unruly behaviour has become the order of the day especially among the final year students in the Technical Institute as Ivan Heathcote – Fumador reported that as at 9:00 in the morning students who should have been in school by 7:00 were now walking lazily to school with no guilt.

Right in the presence of the school’s principal Mrs Andoh Mensah, the students were daring the teachers and security personnel at the gates using all manner of swear words questioning why the gates have been closed.

Mrs Andoh Mensah was worried the behaviour of the student continues to give the school a bad name as she insisted that such acts of lawlessness does not occur in other technical schools across the country.

She was however stern in her warnings that students will not be allowed to dictate to the school their own rules aside the disciplinary standards set by the school and the Ghana Education Service.