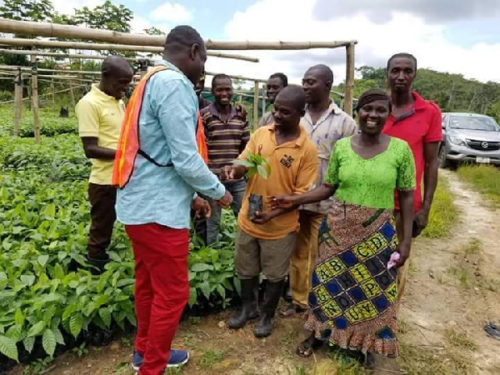 The Municipal Chief Executive of Tarkwa-Nsuaem in the Western Region, Hon. Gilbert Ken Asmah has embarked on a day tour to some selected ongoing projects funded by the Government of Ghana (G.o.G) and the Assembly’s Internal Generated funds (IGF).

The Municipal Chief Executive was accompanied by some selected media houses to inspect the ongoing projects.

The entourage visited the New Administrative Block at Ahwetiaso near Tarkwa which is almost at the completion stage.

The project started during Professor Mills’s regime but was abandoned after 2012 till it was re-awarded to a New contractor in 2018 by the Tarkwa Nsuaem Municipal headed by Hon. Ken Asmah using the Assembly’s share of the Minerals Development Fund (M.D.F)

The MCE was enthused at the rate of work which is almost complete with workers fixing air-conditions at the time the entourage visited there.

In an interview with Hon. Gilbert Ken Asmah, he revealed that the Member of Parliament for the Constituency, Hon. George Mireku Duker was very instrumental in the ongoing project and commended him for his massive support to the Assembly.

He said the President, His Excellency Nana Addo Dankwa Akufo-Addo admonished all MMDCEs in Ghana to thrive hard and complete all projects that began during Professor Atta Mills and John Dramani Mahama’s regimes that are beneficial to the people and the Assembly and since then he has taken that challenge in good faith and making sure such projects are completed.

The team also inspected some roads which are ongoing through the influence of the Member of Parliament though not part of his core mandate and the MCE commended him for his exemplary achievements in the District.

The entourage also inspected thousands of Cocoa and Palm nut seedlings which are at the nursing stage to be provided free to hundreds of individuals mostly former miners who have diversified into farming in the District.

The MCE and his entourage finally met hundreds of vulnerable youth and some former illegal miners who have been assisted by the Assembly, the MCE and a Philanthropist Hon. Kingsley Edmund Baidoo to undergo a free vocational training in area of carpentry, dress making, hairdressing, auto mechanics, welding and other trades at ASEDA FOUNDATION and assured them of free kits and capital after their training to start their own businesses in other not to go back to the street or the Galamsey sites and presented an undisclosed amount for their upkeep at the FOUNDATION.