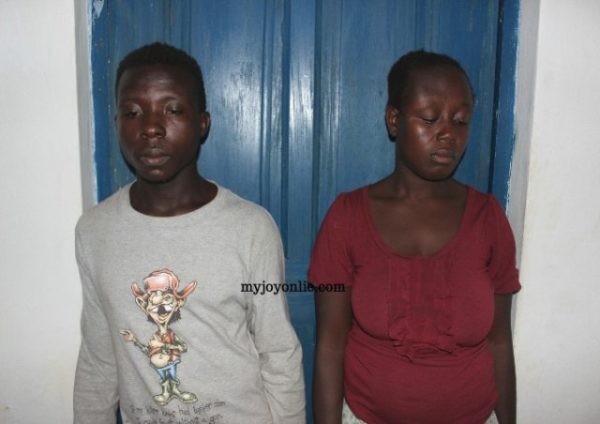 A teenager and his girlfriend have been put in police custody at Dodowa for allegedly strangling and stabbing a 45-year-old Uber driver.

The suspects, John Kyei Baffour, 19 and Beatrice Naa Korley, 22, hired Michael Normanyo’s KIA Picanto with registration number, GS 950-19 from Madina to Dodowa in the Greater Accra region at about 12:30 on Thursday.

Upon reaching the Traditional Council area at Dodowa, the teenager attempted to strangle the driver with a nylon rope as his girlfriend allegedly stabbed the driver in the left arm and leg.

In an attempt to snatch the car from him, the driver managed to overpower them but the suspects escaped.

According Dodowa District Commander, Supt. Harrison Katso, the driver whose shirt was soaked with blood reported the incident at the police station.

“He came to the station with a deep cut on his left arm and leg with his shirt soaked with blood. He brought with him a kitchen knife, a nylon rope, lady’s bag containing clothes and mobile phones and narrated his ordeal,” Supt Katso said.

He said looking at the Mr Normanyo’s condition, he issued him a medical form and he was rushed to the Shai-Osudoku Government Hospital for treatment.

In an interview with Joy News, he said at about 4:00 am on Friday, three residents handed over the suspects to the police.

“Just as the patrol team was about to search for the suspects, a resident, Emmanuel Aboagye and two others brought the suspects who were spotted in the neighbourhood,” he added.

The suspects admitted having committed the crime after interrogation by the police.

Attempts by the police to know their place of abode proved futile.

“There was no physical structure to show at Ritz Junction around Adenta. They claim to be living under a tree. Neighbours said Beatrice recently came around looking for a place for her container,” Supt Katso said.

The police officer advised drivers to be extra vigilant.

“Drivers must always monitor the conversation and demeanour of clients. Installing tracking devices in their cars will be of help in case of attack,” he suggested.

Supt. Harrison Katso also lauded the residents who handed over the suspects without attacking them and urged the general public to always do the same.

The two suspects will be arraigned before court after investigations.

Previous Money Come! Strongman can’t count his blessings as he buys a brand new car
Next My ‘wahala’ after cosmetic surgery – Nana Frema