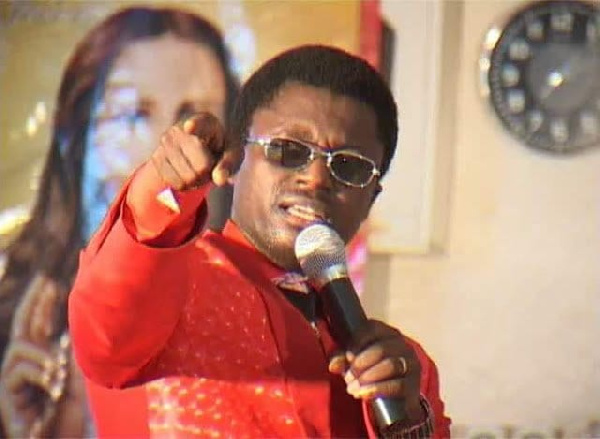 Entertainment Critic and Chief Executive Officer (CEO) of Media Excel, Kwasi Ernest, has asked the founder and leader of the Ebenezer Miracle Worship Center in Kumasi, Prophet Ebenezer Adarkwa Yiadom, mostly known as Opambour to apologize to the good people of Ghana for showing pornographic videos on his television station ‘Opambour TV’ during prime time.

In addition, he has asked the law, specifically the Film Classification Committee headed by the experienced movie producer, Socrate Safo to deal with the man of God for the uncharacteristic showcase of needless content on his free-to-air station.

Speaking on a panel discussion on Peace FM ‘Entertainment Review’, he described the action of the man of God as something which should not be tolerated for continuation.

“I’ve followed Opambour for a very long time and I’m shocked he exhibited such character and boldness to show pornographic material on his television station in this country. He commands respect a lot in this country but I don’t know why, all of a sudden, he has turned himself into a sex counsellor among other things.

He has seen that is where the trend is, so he loves touching on that aspect more in his preaching. The majority of the people have a lot of videos about his supposed sex education and preaching. What I know of a man of God is that preaching’s about salvation is the target but rather NO, in his aspect, it has been about trends.”

“For it to go to this extent, for pornographic materials to be shown on his channel. They can’t tell us the disgusting videos were shown by a mistake. We have nothing like mistakes in TV production. Opambour didn’t do well, he could have avoided telecasting such videos on national television.

Per his caliber as a man of God, I doubt he would be happy with such actions, he must apologize. Willingly, he should write an apology letter to the good people of Ghana even before the law strikes him. Before Socrate and his team, deal with him in accordance with the law, Papa must apologize first” he said.

The outspoken man of God some two weeks ago sparked reactions on social media after showing the pornographic content to his congregation on TV during a live sermon.

The Film Classification Committee afterward has written to him in a statement to explain the circumstances under which he showed such videos on national television.

The Film Classification Committee (FCC) of the National Film Authority has sighted pornographic content being shown on Prophet One TV.

In this content, Ebenezer Adarkwa-Yiadom also known as Prophet Opambour played a TV host recounting a sexual incident between a fetish priest (male) and a woman purported to be his client.

This content depicts patently lewd sensual scenes perceived by the FCC as inappropriate for free-to-air television.

The FCC has publicly announced that all audiovisual content must be classified before the exhibition. In furtherance to this, all broadcasting channels have been directed to classify in-house content according to the film classification criteria given.

The FCC is requesting the management of Prophet One TV to provide the National Film Authority with the classification documents for all its in-house content including the pornographic content shown, by the close of day on 10th September 2021.

Kindly note that anyone who fails to comply with the film classification rules shall be subject to the Offences and Penalties in Section 27 and Forfeiture of Equipment in Section 28 of the Development and Classification of Film Act 935.
Signed
Socrate Safo
Chairman
Film Classification Committee

Everything is impossible until you take the steps to make it possible, be positive in every step you make. Nature will definitely give you the smoothest part of life. Email us on [email protected] Whatsapp: +233540577992
@HiplifeHiphop
Previous Gemann finally opens up on why Jagger Pee was jailed
Next Mahama wasn’t born a leader – Dada KD claims