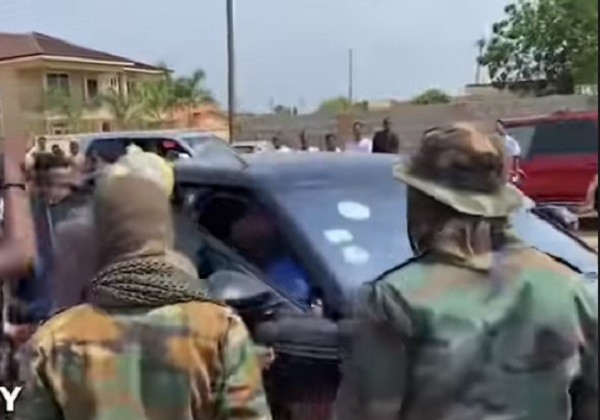 In some of the photos and videos that have surfaced on the internet from the occasion, Medikal could be seen being escorted to the event by uniformed military men

Well, it seems that the gesture by the military men has landed them in trouble. The military personnel who were sighted in the video have been arrested pending investigation in their actions which the head of Public relations of the Ghana Armed Forces Col. Eric Aggrey Quarshie has declared as illegal.

Colonel Eric Aggrey Quarshie disclosed that the occurrence of uniformed Military officers appearing in at private events without approval has become “one too many,” hence their strong resolve to clamp down on it.

Colonel Quarshie added the deplorable practice was bringing utmost disrepute to the uniform and all that it stands for. He maintained that personnel from the Ghana Armed Forces were not for hire to the highest bidder.

Col. Aggrey Quarshie further clarified the military personnel who had been picked up were being detained whilst they waited for investigation and subsequently the appropriate sanction for their illegal actions once the investigations are concluded.

The colonel further discussed that the probable punishment to be meted includes but not limited to from caution or outright dismissal depending on the outcome of the investigations.

It is his strong belief that this would serve as a deterrent to other erring officers who indulge in such frivolous actions in contravention to the code of conduct of Ghana Armed forces.

Everything is impossible until you take the steps to make it possible, be positive in every step you make. Nature will definitely give you the smoothest part of life. Email us on [email protected] Whatsapp: +233540577992
@HiplifeHiphop
Previous I am contemplating the idea of switching my name from Stonebwoy to 1GAD
Next [Mixtape] Hot Topic volume 1 : GET IT LIVE: Hosted By Dj Knight ATL l Pure Genius Entertainment