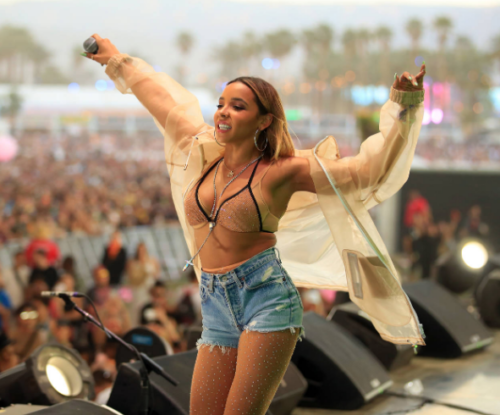 Tinashe’s not ready to sign just yet.
Tinshae split from RCA Records earlier this year in February and has since been an independent artist who’s trying to maintain her name in the industry. Hitmaka recently reported that the “2 On” singer made new label moves since signing to Jay-Z’s Roc Nation but according to the singer they’re just rumours. Tinashe ran into TMZ outside Craig’s in West Hollywood last night and she made it clear that she’s still an independent artist.

“At this point, I just want to put out something independently before I put anything in paperwork,” Tinashe explained. As for a possible bonus that a label such as Roc Nation may offer Tinsahse, she made it clear that won’t get swayed by dollar bills since releasing her music independently is all that matters to her right now. The publication teased that if she did sign with Roc Nation, she’d have to compete with Rihanna.

“There’s no competition there,” Tinashe added.

At the end of her conversation with the publication, Tinashe proves she’s still got it when she busts out a little sample of a tune she’s working on.

“I’ve always had an underdog mentality, and I’ve always felt like I have something to prove,” Tinashe previously told Rolling Stone of her music career. “Deeper than that, I’m trying to balance being able to release the type of content that’s fulfilling to me as an artist [while] trying to navigate a changing music industry.”

Young Blackboi Amg Napiboi is an experienced Public Relations Officer and Author with a demonstrated history of working in the music industry. He holds an enviable record of working directly and running PR jobs for both international and local artistes; notable among his huge repertoire of artistes worked with are Morgan Heritage (Grammy Winners), Rocky Dawuni (Grammy Nominee, 2015), Samini (MOBO Winner - 2006, MTV Awards Africa Winner - 2009) and Stonebwoy (BET Best African Act Winner - 2015). Other mainstream artistes of great repute he has worked with are EL, Eshun, Kula, (just to name a few), who have all won multiple awards under Vodafone GHANA Music Awards (VGMAs). Young Blackboi Amg Napiboi has done PR & road jobs for Sizzla, Jah Mason, Busy Signal, Kiprich, Anthony B, Demarco, Turbulence, Popcaan, Jah Vinci & Morgan Heritage who came to Ghana for concerts and other activities. Young Blackboi Amg Napiboi has done countless activations for artistes and has coordinated dozens of events both locally and internationally. He deeply understands the rudiments of the industry and has an upper hand in the reggae and dancehall fraternity (has served as an Executive Board Member of Vision Awards). His passion for the profession is enormous. Aside his PR duties, he also stands tall as one of the few bloggers who breakout first hand credible and also dig out substantial informations relating to the arts & industry. He is quite visible in the industry and very influential on social media, which to his advantage, has gunned a massive following for him on social media as well as in real life. He is a strong media and communication professional skilled in Coaching, Strategic Planning, and Event Management. He's very transparent on issues around the art industry.
Previous Tyler, The Creator Brings A$AP Rocky For “Who Dat Boy” At MSG Show
Next Megan Thee Stallion Song Causes Tina Turner Musical Writer To Tear Her ACL